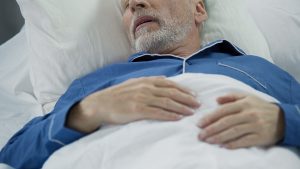 New research from the Freemason’s Center for Male Health and Wellbeing (FCMHW) has found a potential link between a type of fat in the blood and obstructive sleep apnea (OSA).

Approximately 60 million adults in the US have a sleep disorder, and obstructive sleep apnea is one of the most prevalent. The condition causes the airway to close off during sleep, so the lungs cannot adequately oxygenate the blood.

OSA is a potentially dangerous condition that can increase the risk of type 2 diabetes, stroke, depression, and cardiovascular disease. It has become a significant health issue in the United States, and if left untreated, it could become severe.

OSA has been known as a factor in many traffic accidents and accidents with heavy machinery, owing to the persistent drowsiness suffered by many OSA patients before the disease is recognized and treated.

For the study, participants were taken from the Men Androgens Inflammation Lifestyle Environment and Stress Study (MAILES), a comprehensive assessment of the health of men aged 40 and over in Australia. There was a total of 753 men involved, 50% of which were shown to have moderate to severe OSA.

It was found that participants with more severe OSA and reduced blood oxygen concentrations were more likely to have elevated concentrations of triglycerides in the blood.

Researchers noted some of the results were concerning because the most striking effects were seen in people who were not overweight. OSA is a common condition that can happen in lean people but is rarely recognized until the individual’s health is severely impaired.

“The key message from this study is that testing for OSA should be considered even in lean men with elevated blood triglycerides concentrations,” said, lead author of the study, Professor Gary Wittert.

Researchers believe that continuous positive airway pressure therapy (CPAP) may help reduce concentrations of triglycerides and the symptoms of OSA. CPAP machines are available for patients who may be at risk for OSA. These machines are meant to be worn at night and work by supplying a continuous stream of pressurized air that travels through a filter and flexible tubing. The device has a pump that controls the airflow and a mask that goes over the nose, mouth, or both.

Prof Wittert and his team believe further studies are needed to better understand the relationship between obstructive sleep apnea and fat in bloo d. This study only looked at middle-aged men, so the results need to be tested in women and younger men. By testing the effectiveness of CPAP treatment for these groups, it could offer new preventative measures.