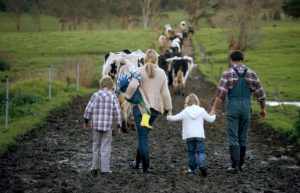 City dwellers often experience internal conflicts. The stresses and complaints of living in dense populations often bring people to their breaking point, wanting to escape from it all. And some of us daydream about moving to the country for its relaxing and stress-free atmosphere.

New research is making country life seem even more attractive. A recent study suggests that it may reduce the frequency and severity of respiratory illnesses, allergies, and chronic skin rashes in young children.

There is no doubt that living in a big city exposes you to more pollution and other hazards that come with living amongst thousands of other people. It can lead you to develop certain sensitivities to allergens in the air, make you susceptible to communicable infections from your peers, or even precipitate the development of certain diseases.

The reasons noted above are usually why some adults consider not raising their family in a densely populated city.

“Seeing decreased allergies in farm-exposed children from the Marshfield area is in agreement with similar findings in Western Europe that found farm exposure is linked to allergic disease and wheezing illnesses. But this is the first study to show an association between farm exposure and reduced medically-attended respiratory illnesses,” said Dr. Christine Seroogy, an Associate Professor of Pediatrics and researcher at the University of Wisconsin School of Medicine and Public Health.

The study in question utilized questionnaires and reviewed medical records to compare children who grew up in very different areas. The first group consisted of 268 children, ages five to 17, who lived on a dairy farm from birth. This group was then compared to 247 children who were born and raised in urban areas and had never lived on a farm.

The researchers found that health conditions such as allergic rhinitis, hay fever, and eczema were significantly less common in those children who have been brought up on a farm. These farm children also had much less severe respiratory illnesses during the first two years of life.

“These findings suggest that environmental exposures or other elements of the farming lifestyle help kids to be resistant to both allergies and viral respiratory illnesses,” said James Gern, a Professor of Pediatrics and a contributing researcher on the study.

The researchers are also looking into the farm exposures that may be beneficial for growing children and whether they help stimulate their developing immune system. Their ultimate goal is to identify why exactly a farming lifestyle contributes to this overall positive effect.

Related: Cure for all allergies a possibility, according to new research