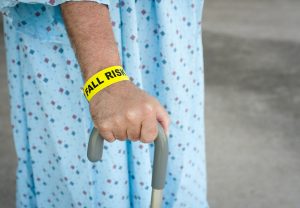 People with Alzheimer’s are already at a higher risk for falls than the average person. A new study suggests that damage to the inner ear system that controls balance could be a major reason.

The vestibular system is an intricate network consisting of several canals and bony structures deep inside the inner ear. The impaired system can lead to dizziness, vertigo, and balance issues, even in perfectly healthy people.

A new study by researchers at John Hopkins Medicine found that damage to the vestibular system may be especially dangerous for people with Alzheimer’s.

Overall, their small study of 48 with Alzheimer’s found that impairment to the vestibular system was linked with a 50 percent increase in fall risk.

People with Alzheimer’s with no damage to the vestibular system were about half as likely to fall than those with impairment.

Falls are a major problem for people with Alzheimer’s disease. They tend to fall at twice the rate of healthy older adults, often leading to injury, assisted living requirements, or early death.

Some describe the vestibular system as a sixth hidden sense because it functions subconsciously. It is always “on” and usually operates to keep people oriented as they move through space.

It senses what’s up, down, and all around and feeds that information to the brain, much like other sensory organs like the eyes or ears. But unlike closing your eyes or plugging your ears, you can not wilfully control the vestibular system. When the system is impaired, it is very difficult to navigate the world.

Thankfully, vestibular treatment is available. Balance exercises performed with the care of a physical therapist can help, but it is up to doctors to recognize it and screen Alzheimer’s patients for damage.