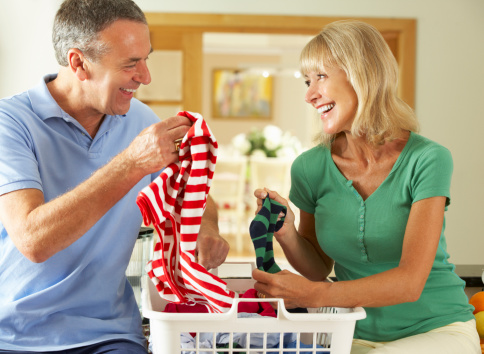 Research suggests couples who fairly split housework enjoy a better sex life. The findings, from the University of Alberta, suggest that when the man helps out with the housework, a couple is able to enjoy more satisfying sex. The research did not reveal how much housework a man would have to complete in order to boost satisfaction.

Previous research reported that men who completed housework contributed to couples having less sex, but the new findings clearly negate that. Dr. Matt Johnson from the university said, “(That study) didn’t ring true. It didn’t fit with my intuition and background experiences as a couple’s therapist.”

Johnson reviewed data from a five year study of 1,338 German couples to identify if the amount of housework a man does influences a couple’s sex life. From that he did not find any connection. He then moved onto the male perception of how much housework they contributed to and how that was related to the couple’s sex life.

Johnson said, “In any relationship, the amount of housework is going to mean something different based on the couple’s context, based on their own expectations for what each partner should be doing, and their comparison levels of what happens with other couples they know.”

His findings suggest that when men perceived that division of labor was fair the couple had more frequent sex, and both individuals were more satisfied with their sex life.

Johnson did acknowledge that there are cultural differences between Germany and America; in Germany gender roles tend to be more traditional. Men in Germany, as well, have been found to complete less housework than American men.

Johnson added, “There are cultural differences but if the logic held from the prior studies, we would have expected to have a more pronounced negative impact of housework on sexuality in Germany because it’s a bit more traditional. But that wasn’t the case at all. Rather than avoiding chores in the hopes of having more sex, as prior research would imply, men are likely to experience more frequent and satisfying passion for both partners between the sheets when they simply do their fair share.”