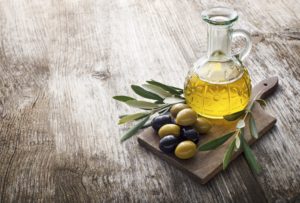 Adding extra virgin olive oil to your diet may be an effective way to boost brain health and lower dementia risk. This new information comes from a study conducted by scientists at the Lewis Katz School of Medicine at Temple University.

Extra virgin olive oil is a superfood that is rich in cell-promoting antioxidants. It is known for its multiple health benefits including lowering risk of disease linked to aging, including cardiovascular disease and cognitive decline such as Alzheimer’s disease.

The new study published in the journal Aging Cell, was led by senior investigator Domenico Praticò, MD, Professor in the Departments of Pharmacology and Microbiology, and Director of the Alzheimer’s Center at Temple. Praticò and his team set out to show another group of age-related diseases that can be affected by the consumption of extra virgin olive oil.

Tauopathies are characterized by the gradual buildup of an abnormal form of a protein called tau in the brain. This process has been shown to lead to a decline in cognitive function, or dementia. These findings are the fist to suggest that extra virgin olive oil can reduce the risk of mental decline that is linked to tauopathy, which is known as frontotemporal dementia.

Frontotemporal dementia generally affects the areas of the brain near the forehead and ears. Symptoms typically begin to show between the ages of 40 and 65 and can include changes in behavior and personality, difficulty with language and writing, and eventual deterioration of memory and ability to learn from prior experience.

Praticò, explains in the study how this research may be able to show the ability of extra virgin olive oil to reduce the risk of cognitive decline and to protect the junctions where neurons come together to exchange information. These are known as synapses.

“Extra virgin olive oil has been a part of the human diet for a very long time and has many benefits for health, for reasons that we do not yet fully understand,” he said. “The realization that extra virgin olive oil can protect the brain against different forms of dementia gives us an opportunity to learn more about the mechanisms through which it acts to support brain health.”

As the research team examined the brain tissue from the mice, they found the improved brain function was most likely from healthier synapse function, which in turn was linked with higher levels of a protein known as complexin-1. Complexin-1 is known to play a critical role in maintaining healthy synapses.

Praticò and his colleagues plan to explore the outcome of extra virgin olive oil that has been fed to older animals that have begun to develop tau deposits and signs of decline in mental function. This will reflect a clinical scenario in humans more closely than the latest study.