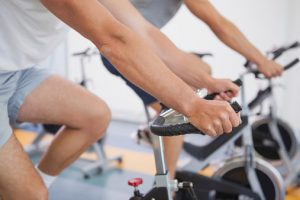 While the benefits of exercise on your fitness, mood, sleep patterns, and cognitive function are well known, a new study from the University of California, Santa Barbara has found that it can also improve your eyesight. Researchers previously discovered that visual processing in mouse and fly models increases during physical activity, and this study aimed to learn whether this benefit translated to humans as well.

To conduct this study, the team gathered 18 volunteers and had them perform an orientation discrimination task while riding a stationary bicycle. To measure brain activity and exercise intensity, participants were made to wear an EEG (electroencephalogram) cap that contained 64 electrodes, as well as a wireless heart rate monitor. The task was completed while participants were at rest, during periods of low-intensity exercise, and during periods of high-intensity exercise.

Researchers used the data from the EEG cap to compare the level of activity within the visual cortex—the part of the brain associated with visual processing—in each participate during rest, low-intensity exercise, and high-intensity exercise to see when it was functioning best.

It was discovered that periods of low-intensity exercise increased the activity of neurons within the visual cortex and improved visual processing when compared to the brain at rest and during periods of high-intensity exercise.
Dr. Garry Giesbrecht concluded, “… The benefits of brief bouts of exercise might provide a better and more tractable way to influence information processing—versus, say, brain training games or meditation—and in a way, that’s not tied to a particular task.”

This study further proves that regular exercise has many benefits beyond personal fitness, and that along with physical health, it can also protect and enhance mental capabilities.

Exercise reduces the risk of vision problems in diabetics