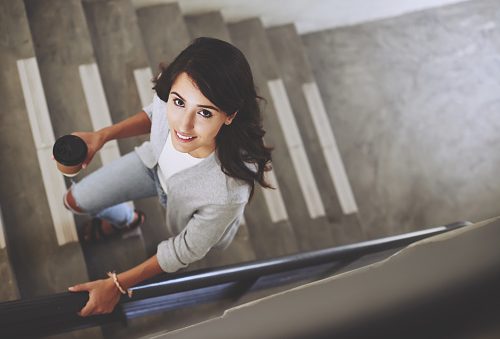 We all get that feeling in the middle of the work day. You know the one… It’s after lunch and all of a sudden you get really tired. Our natural inclination is to reach for that midday cup of caffeine, whether it be a shot of espresso, a large cup of coffee, or a coke. While we think this is the best option to boost our energy levels for the rest of the day, in actuality, all it does is lead to a crash later on.

Luckily, researchers from the UGA College of Education “found that 10 minutes of walking up and down stairs at a regular pace was more likely to make participants feel energized than ingesting 50 milligrams of caffeine—about the equivalent to the amount in a can of soda.”

Because a huge chunk of the population works in an office—sedentary and sitting all day long—the researchers thought it best that the study simulates this type of setting. They wanted to use a form of exercise that was easy to do for most people, and walking is really the most accessible form of exercise in the world.

They took into consideration the weather and that sometimes office workers aren’t able to get outside for a walk. So, they decided to use the stairs—all buildings have them. On separate days, study participants—sleep deprived female college students—either walked up and down a set of stairs for ten minutes or had a caffeine or placebo pill.

To measure how exercise compared with caffeine in combatting tiredness, the researchers employed the participants to do a verbal and computer-based test. Stair walking was unequivocally superior to caffeine at providing a cognitive boost. However, neither provided significant increases.

No difference was found between the caffeine and placebo group, “but with exercise, they did feel more energetic and vigorous. It was a temporary feeling, felt immediately after the exercise, but with the 50 milligrams of caffeine, [participants] didn’t get as big an effect.”

There is no replacement for adequate sleep

With that said, you really can’t replace sleep with exercise or caffeine. The increases in energy seen were very small. If you want to make sure you have energy all day every day, you need to consume a well-balanced diet—meaning a healthy breakfast and lunch—and get enough sleep for your body. There’s no magic number, but we recommend between 7–9 hours of sleep a night.