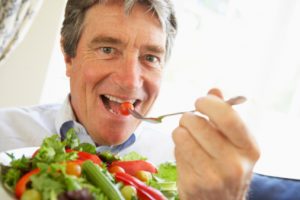 Men who partake in vigorous exercise and other healthy lifestyle habits can reduce their risk of prostate cancer by 68 percent, according to researchers at the University of California, San Francisco.

Many prostate cancers are not life threatening, but there are some aggressive types that can attack the bones and other organs, which can be fatal.

For the research, investigators analyzed data from two U.S. studies that tracked over 62,000 men over the course of 30 years. The researchers created a point system for the surveys, which were completed by the participants. Points were given based on regular exercise intensity that led to sweating, body mass index under 30, tobacco-free status for at least 10 years, intake of fatty fish, high intake of tomatoes and low intake of processed meat.

Participants were free of cancer prior to the study to reduce errors. Medical records and pathology reports confirmed cancer-free status.

Lethal prostate cancer was identified in 576 men from one study and 337 from the other. Men who had five to six points from the survey results had a 68 percent lower risk of lethal prostate cancer in the first study and a 38 percent reduction in the second study. Regarding dietary factors, those who had points compared to those who did not had a 46 percent and 30 percent reduction respectively.

Scores were seen to be similar in both study groups, revealing that good lifestyle habits could be beneficial for prostate health and reducing the risk of lethal prostate cancer.

Researchers also suggest that if men over the age of 60 consumed at least seven servings of tomatoes each week, prostate cancer risk would reduce by 15 percent. It would also decrease by 17 percent if one serving of fatty fish was added to their diets each week. Reducing the intake of processed meat would lower the risk by 12 percent and non-smoking brings it down by three percent.

Senior author, June M. Chan, Sc.D., said, “This study underscores the ongoing need for more effective prevention measures and policies to increase exercise, improve diet quality and reduce tobacco use in our population. It takes co-operation and effort from multiple areas, like insurance companies, employers, policy makers and city planners, to figure out how to creatively support and encourage more exercise into most busy adults’ working day. These lifestyle habits align with other recommendations to prevent diabetes and heart disease.”

The findings were published in Journal of the National Cancer Institute.