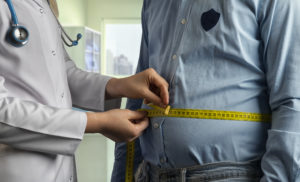 New research shows how excess belly fat is linked with multiple occasions of cardiac events such as heart attack. It has long been known that fat stored around the belly is a marker for heart attack, but until now, the association between abdominal obesity and the risk of a subsequent heart attack or stroke was unknown.

The study published in the European Journal of Preventive Cardiology is the largest and most definitive ever conducted on this topic. More than 22,000 patients were recruited from the nationwide SWEDEHEART registry and followed for a median of 3.8 years. Most of the patients, 78% of men and 90% of women, had abdominal obesity (waist circumference 94 cm or above for men and 80 cm or above for women).

Researchers followed the patients after their first heart attack to investigate the relation between waist circumference and the risk of recurrent cardiovascular disease events. They specifically looked at events in patients caused by clogged arteries such as fatal and non-fatal heart attack and stroke.

Study author Dr. Hanieh Mohammadi of the Karolinska Institute spoke about the usual treatment of patients after their first heart attack. “Patients are typically put on a stringent medical treatment regimen after their first attack to prevent second events (called secondary prevention).
Secondary prevention works through reducing risk factors associated with heart attack and stroke such as high blood sugar, lipids, and blood pressure. It was previously unknown whether abdominal obesity is a risk factor for recurrent events among patients on secondary prevention treatments.”

This study found that increasing belly fat was independently associated with fatal and non-fatal heart attacks and strokes, regardless of other risk factors such as diabetes, smoking, high blood pressure, blood lipids, and body mass index (BMI). Waist circumference was a much more of an important marker of recurrent events than overall obesity.

Dr. Mohammadi said: “The reason abdominal obesity is very common in patients with a first heart attack is that it is closely linked with conditions that accelerate the clogging of arteries through atherosclerosis. These conditions include increased blood pressure, high blood sugar and insulin resistance (diabetes) as well as raised blood lipid levels.”

There are a few different hypotheses as to why women would be different from men. Researchers point out that there were three times as many men in the study, which could have contributed to less statistical power in the female group. Previous studies have also suggested that abdominal obesity may be more directly associated with visceral fat in men than women. It is thought that women have a greater portion of subcutaneous fat which is relatively harmless.

Although more research is needed on this subject, researchers stress that “Abdominal obesity not only increases your risk for a first heart attack or stroke, but also the risk for recurrent events after the first misfortune. Maintaining a healthy waist circumference is important for preventing future heart attacks and strokes regardless of how many drugs you may be taking or how healthy your blood tests are. Abdominal obesity can be tackled by eating a healthy and balanced diet and regular physical activity.”