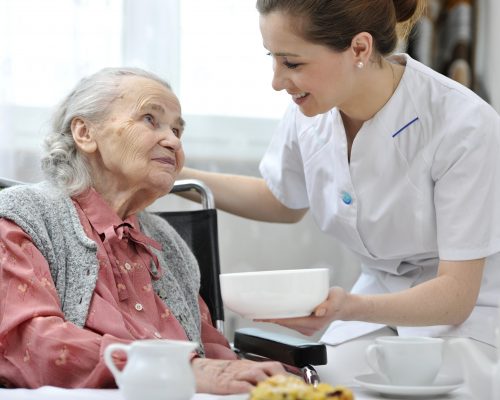 My mom is always saying how she and my dad eat far less than they used to. They just don’t have a big appetite and don’t like to eat out at restaurants much, either, because the portions, they complain, are far too big. (And they are for anyone, in my opinion.)

Now it could be because my folks are less active than 20, even 10 years ago, or because no large meals need to be prepared since my sisters and I left home and my parents became happy empty-nesters. Or it might be my dad’s partial denture that keeps giving him trouble. He was such a steak-lover in barbecue season, but now he finds his favorite striploin hard to chew. My mom buys fast-fry thin cuts so she can make a quick meal in the frying pan with butter that he can eat more easily.

Yes, my mom still does all the cooking. And when she’s away, Dad’s go-to is canned pork and beans (sometimes right out of the can so he doesn’t have to dirty a dish!)

But are they eating enough? Are they eating quality, nutritious foods to get the nutrients their bodies need? Sometimes, I wonder.

It’s a concern that hit home this week when I read about an alarming report issued by the American College of Emergency Physicians: More than half of older adults who visit emergency departments are either malnourished or at risk for malnutrition. What? We’re not talking about people in developing countries facing food scarcities or poverty or worse. This is the United States, land of food abundance and skyrocketing numbers of people who rely on fast takeout and home delivery.

RELATED READING: How often do you really need to see your doctor for a checkup?

Keep in mind, too, that seniors visit ERs more than 20 million times a year in the U.S., so this is no small number of people identified as suffering from lack of proper food.

I’m shocked by this. What’s gone wrong here?  The study, published in the college’s peer-reviewed journal, Annals of Emergency Medicine, has uncovered a complex problem. The seniors were not at risk because of lack of access to health care, critical illness or dementia—which would have made some sort of sense.

Malnutrition is defined as lacking “adequate calories, protein or other nutrients needed for tissue maintenance and repair.” In other words, a condition that will sabotage the immune system and put seniors at risk for serious illness.

Beyond the sheer lack of diagnosis, study authors identified contributors to the problem as depression, dental problems and difficulty buying groceries. Again, this has nothing to do with lack of access to health care. But it might have a lot to do with how isolated and disconnected seniors can become when they’re living on their own or have become estranged from family or friends.

Breaking this down further, malnutrition was highest among patients with symptoms of depression, those residing in assisted living, those with difficulty eating (from denture problems, dental pain or trouble swallowing) and those reporting difficulty buying groceries.

These are not disadvantaged people. Nearly all had a primary care physician, lived in a private residence and had some type of health insurance. More than one-third had a college education.

In other words, this could be almost any one of the seniors in your community, your neighborhood or right next door — literally wasting away, likely with no recognition that it’s even happening. Sure, their clothes fit more loosely but so what? No big deal. For people on their own with no one to share their meals with, it’s common to lose interest in eating or even socializing. I think it’s those feelings of solitude which can lead to depression, lack of sleep and lack of interest in taking good care of your health.

If you can lend me a soap box for a moment, I’d hasten to add that it’s a sad comment on our modern society, where people, despite our technological magic ties, are increasing less connected, less involved and less engaged. No matter what facebook and twitter say about 24/7 communication, without face-to-face interactions, our ability to thrive is diminished. We are social animals who need to take care of each other, especially those most vulnerable, like children and the elderly.

RELATED READING: Why it’s so important to keep your cholesterol in check

Here the study authors recognize a key point: Emergency rooms are playing a growing role as community health resource centers. While seniors visit for acute illnesses, ER staff can also use these visits as an opportunity to identify and address the unmet needs of older adults.

When it comes to possible malnutrition, the use of oral nutritional supplementation is inexpensive and may reduce overall health care costs by speeding recovery from illness and reducing readmissions, says lead study author Dr. Timothy Platts-Mills of the University of North Carolina Department of Emergency Medicine in Chapel Hill, N.C.

“Emergency physicians have an opportunity to screen and intervene in ways that may be very helpful without being very costly,” he says.

Patients who report difficulty buying groceries, for example, can be directed to a supplemental nutrition program, or community-based food charities and programs like Meals on Wheels can congregate meals programs.

And, I say, how about checking in on your elderly neighbor to see how they’re doing – or making a visit to your doctor or a nutritionist to see if you’re getting the nutrients you need yourself.

I’m going to ask my parents to do the same!