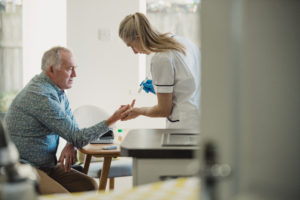 For years, public health officials in the United States and around the world have been concerned about the rapid increase of type 1 diabetes. With the rise in the disease, scientists and researchers are at a loss when trying to identify a direct cause. One thing that many have questioned, however, is if changes in the environment or lifestyle can have a direct impact on the disease.

Research published in The Lancet Diabetes & Endocrinology examined whether environmental or lifestyle changes can be directly linked with an increase in diabetes in society.

“The incidence of type 1 diabetes has increased 3 percent per year over the past three decades. This increase is too rapid to be due to genetic factors, suggesting that environmental factors may play a role,” said Jill Norris, MPH, Ph.D., and lead author of the paper.

Norris, who is the professor and chair of epidemiology at the Colorado School of Public Health, along with her team, started by reviewing literature on environmental factors such as air pollution, childhood obesity, diet, the duration of breastfeeding, the introduction of cow’s milk, infections, and many others that showcase an impact on type 1 diabetes.

They followed up this research by looking at the prevalence of exposure over time while varying its annual increase under simulated scenarios. Using this simulated data, researchers concluded that if a single factor were to explain the changes in the incidence of type 1 diabetes, it would have to be very strongly associated with the disease.

These simulated scenarios found that an environmental factor that could increase diabetes at such a consistent rate would have to carry a relative risk of 5 to explain an approximately 3 percent annual increase in the incidence of type 1 diabetes. However, when examining the factors, most showed a small relative risk of only 2 or lower.

“While several factors have been associated with type 1 diabetes, none of the associations are of a magnitude that can explain the rapid increase in incidence alone,” Norris said. “Moreover, evidence of the changing prevalence of these same exposures over time is not convincing nor consistent.”

Although this study was not able to prove that any single specific environmental factor was the cause of the increase in type 1 diabetes, it did show multiple factors are to blame. Researchers do warn that the factors examined could have been underestimated due to exposure measurement error or mismodeling of complex exposure-time-response relationships.

Researchers concluded that environmental exposure along with lifestyle changes over time could lead future studies to show the impact it has on the rise of type 1 diabetes. This information is important because of the implications for prevention. They hope that over time, they will be better able to understand the excessive increase in type 1 diabetes.