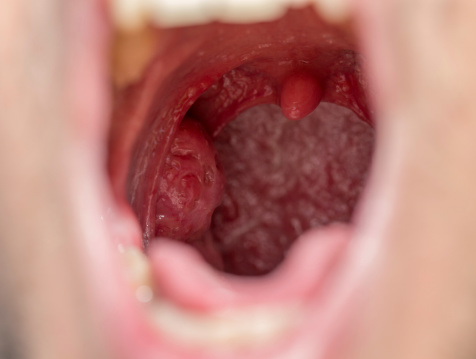 Enlarged uvula can lead to snoring and obstructive sleep apnea. Among normal adults, 45 percent are occasional snorers and 25 percent are habitual snorers. Most commonly seen in males, snoring may be a result of an obstruction, so it should be considered a serious symptom to address with your doctor.

There are numerous causes for snoring, including poor muscle tone of the tongue and throat, excessive bulkiness of throat tissue, long soft palate or uvula, or obstructed nasal airways.

Snoring can result in a health condition known as obstructive sleep apnea (OSA), which is when a person stops breathing numerous times throughout the night. Being overweight or having high blood pressure can contribute to OSA, but another common cause is an enlarged uvula, the dangling piece of flesh at the back of the mouth.

The role of uvula is not fully understood, but its possible functions are assisting with speech formation and production of saliva.

Inflamed or swollen uvula is the main symptom of a health condition uvulitis, which can contribute to sleep apnea. If the uvula becomes very swollen, it may even reach the tongue, causing an obstruction. Other signs and symptoms of a swollen uvula include redness, as well as difficulty breathing or swallowing.

If your uvulitis does lead to sleep apnea, you may also suffer from high blood pressure, daytime headache, constant low energy or fatigue, and weight gain. Treating enlarged uvula and sleep apnea is important for reducing your risk of complications.

You should see a doctor for your enlarged uvula if you experience severe pain, difficulty breathing, uneasiness due to lack of oxygen, severe pain or difficulty swallowing, grunting and choking, pus or blood from the uvula, or if you stop breathing throughout the night.

The medications that may be prescribed for an enlarged uvula include antibiotics if uvulitis has been caused by bacteria, steroids if swelling is due to an allergen, and antihistamines.

Home remedies for a swollen uvula include:

These home remedies for an enlarged uvula can bring you some relief from your symptoms.