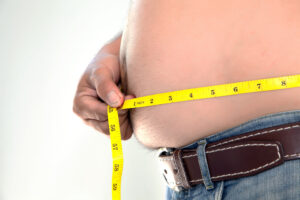 Maybe a beer gut isn’t so bad after all.

At least that’s what a small, new study is saying. So, if you want to unwind and beat the heat with a cold beer, you may get a little extra benefit.

Of course, we’re not talking about the girth that’s typically associated with a beer gut. Instead, the researchers found that when men drank one bottle of beer daily, the population of microbes in their guts became more diverse.

A diverse microbiome – the collection of bacteria and microorganisms that naturally dwell in a person’s gut – is typically associated with better health and may play a role in a host of processes, including digestion, immune function, and mood.

The study recruited 19 healthy men who were moderate drinkers and assigned them to one of two groups. One group drank a bottle of lager beer every night with dinner for four weeks, while another drank a non-alcoholic beer for the same duration.

Both groups maintained their regular eating and exercise habits.

Before and after the trial, the participants supplied stool samples to analyze their gut bacteria.

After the trial, both groups displayed higher microbial diversity in their samples, suggesting that beer had a positive impact.

Of course, beer isn’t a savior for your gut. There is no single food that will pay an overwhelming influence on health. It’s all about your overall diet and lifestyle.

There are a number of factors that can play a role in gut health. One of the modifiable ones is what you eat. A diet rich in vegetables, fruit, whole grains, and dairy and low in processed foods and refined grains seems to be optimal for gut health.

A beer per day, malted barley grains that offer several polyphenols, may add something to your health. But it also might just be something to enjoy from time to time.