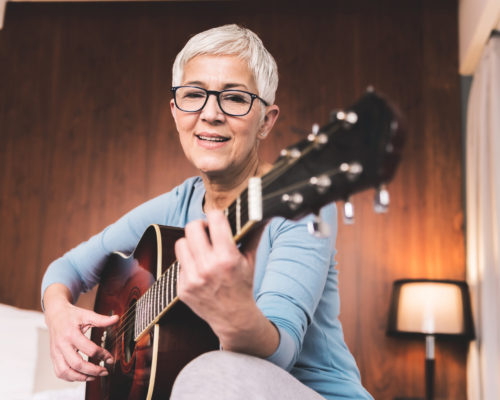 Depression among the aging population is on the rise. But a new study from the English Longitudinal Study of Ageing shows how adopting a new hobby may help keep depressive symptoms at bay.

Previous studies have shown the importance of non-medical sources of support for overall health, but this study is showing a direct relationship between the uptake of new hobbies and depressive symptoms. Activities such as drawing, music, or handicrafts like sewing, collecting, carpentry, or model making have been shown to help relieve symptoms of depression.

These activities, along with others such as volunteering, can provide engagement, self-expression, creativity, and relaxation, all of which are positively associated with mental health.

The study included data from 8,780 adults with an average age of 67 with biennial measures from 2004/5 to 2016/17. At the start of the study, 71.9% reported having a hobby or pastime, while 15.6% were above the threshold for depression using the Centre for Epidemiologic Studies Depression Scale (CES-D).

In those who had depression at the start of the study, and did not have a hobby, starting one was associated with 272% higher odds of recovering from the depression and a high improvement in depressive symptoms. These results were consistently found in both men and women.

Improving the Quality of Life

According to the U.S. Centers for Disease Control and Prevention (CDC), the number of people aged 65 or older will more than double by 2030, and ideas for improving the quality of life for those living longer means increasing activity. This study helps to support the use of social prescribing of hobbies to this aging population to help supplement patients’ existing health care plans.

Taking up a new hobby doesn’t have to mean investing in expensive supplies or joining a class. It can be as simple as picking up a book. Reading, walking, or even just getting outside to watch the birds can help with mental health. No matter what you enjoy, there are many options to take up a new hobby and help keep any depressive symptoms at bay.