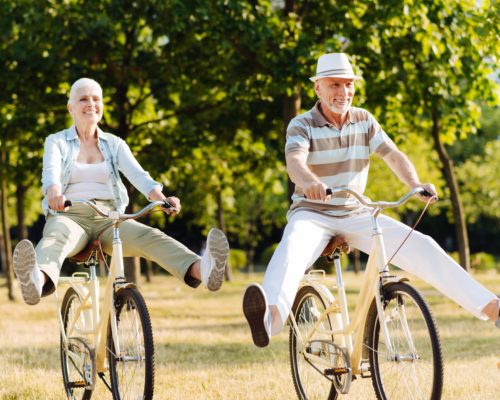 Electric bikes may boost mental health in older adults. This is one of the first studies of its kind to study older adults in an outdoor study as opposed to a gym setting, which is typically where most of this type of research takes place.

For the study, adults over the age of 50 were asked to cycle for at least one hour a week for eight weeks. Participants either used conventional push-petal bikes, an electronic bike, or adhered to their non-cycling life. Mental ability, mental health, and well-being were measured before and after the eight-week study period.

Exercise helps to boost mental clarity because it increases blood flow to the brain along with encouraging cell growth, specifically in the hippocampus, which is an area of the brain responsible for memory.

After eight weeks of cycling, participants experienced improvements in the Stroop test, which was not seen in the non-cyclers.

Electronic biking is a great way to get older adults outdoors, which has been linked with several health benefits such as reducing stress and improving mood along with promoting activity. This can be difficult for older adults who suffer from aches and pains.

Lastly, as the research suggests, it’s a great way to improve memory along with mental health, which is important in older adults as cognitive problems increase with age.