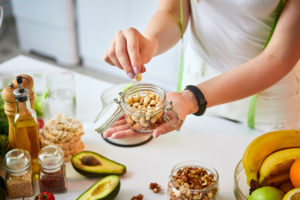 A handful of walnuts a day may help lower the risk of cognitive decline among at-risk groups of the elderly population. This new information comes from a new study published in The American Journal of Clinical Nutrition.

Researchers found that walnut consumption of healthy elderly adults showed little effect on cognitive function over two years. However, those who were smokers and had lower baseline neuropsychological test scores showed progress when consuming walnuts.

Walnuts have long been studied for their effect of cognitive decline as they contain omega-3 fatty acids and polyphenols. In fact, walnuts have higher antioxidant activity than any other nut. These key compounds found in the nuts have previously been found to counteract oxidative stress and inflammation, both of which are drivers of cognitive decline.

For this study, 640 seniors from Loma Linda, California, and Barcelona, Spain were followed for two years. Participants were divided into two groups—a test group who included walnuts into their daily diet and a control group who abstained from walnuts.

This study is the largest and most well-controlled trial ever conducted on the effects of walnuts on cognition. Joan Sabaté, MD, Ph. D, spoke about the study, saying, “While this was a minor result, it could lead to better outcomes when conducted over longer periods of time. Further investigation is definitely warranted based on our findings, especially for disadvantaged populations, who may have the most to gain from incorporating walnuts and other nuts into their diet.”

Previously published in the New England Journal of Medicine in 1993, Sabaté and his team were the first to discover the cholesterol-lowering effect of nut consumption. This research focused on nuts, specifically walnuts, and how it can lower blood cholesterol. They have also found a link between nut consumption and a lower risk of cardiovascular disease.

With this new study, researchers hope more information will help to change the way health care providers look at preventative measures for cognitive decline in at-risk groups. With an aging population, not only are people living longer but as they age, they require additional health support which is placing unprecedented pressure on aged-care and health services. Studies such as this help to shed light on taking preventative measures before health support is needed.