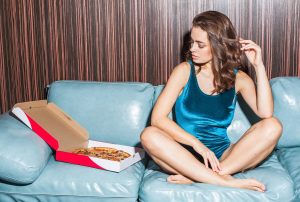 Stress and fast food sometimes go hand in hand. When people are stressed, they often crave fat and carbs and head to the closest drive-through. This seems to be the case, especially among stressed-out, low-income mothers.

But a new study set out to find how these mothers were able to cope with stress if given tips from other mothers. The 16-week program was aimed at preventing weight gain. It focused on promoting stress management, healthy eating, and physical activity.

It is common for the women in this demographic to retain ten or more pounds of pregnancy weight after childbirth. This added weight could put them at risk for life-long obesity and potential problems for themselves and new babies if they become pregnant again.

These women may also feel impatient and have head and neck pain. In addition to pain, they may also have sleep problems.

Three hundred and thirty-eight women participated in the study and were all overweight and low-income. All were between the ages of 18 and 39. All participants were recruited from the Special Supplemental Nutrition Program for Women, Infants, and Children (WIC), which serves low-income mothers and children up to age 5.

The women were likely to face several challenges that could cause them stress. These challenges include living in run-down neighborhoods, frequent moves, unstable romantic relationships, and households bustling with little kids.
During the study, the participants watched 10 videos in which other women gave them unsolicited advice about healthy eating and food preparation. They also spoke about managing stress and being physically active.
Participants in the study were also required to dial into ten peer support group teleconferences throughout the study.

Researchers were able to conclude that women who received intervention about their lifestyle habits could reduce their perceived stress, which resulted in an association with less consumption of high-fat foods, including fast food. A nearly 7% reduction in how frequently the women ate high-fat foods was recorded.

Mei-Wei Chang, the lead author of the study, said, “We raised their awareness about stressors in their lives, and unfortunately, a lot of these problems are not within their control. So, we teach them ways to control their negative emotions – remember that this is temporary, and you can get through it. And give them the confidence to look to the future.”

As a result of the study, the women were given the tools to shift their thinking and not to blame themselves when things go wrong. Instead, they can now take on problem-solving to help deal with the problems that caused them stress.