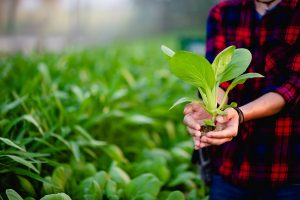 Green, leafy vegetables are good for overall health, but new research shows that they could also boost muscle strength. The study from Edith Cowan University (ECU) found that people who consume a nitrate-rich diet had significantly better muscle function in their lower limbs.

Many older adults suffer from poor muscle function, leading to a greater risk of falls and fractures. It can also be considered a key indicator of general health. With around one in three seniors suffering a fall each year, it’s essential to find alternative ways to prevent these events, as they can sometimes have serious consequences.

Researchers analyzed data from 3,759 Australians who took part in Melbourne’s Baker Heart and Diabetes Institute for the study. Over 12 years of the study, it was found that those with the highest regular nitrate consumption had 11 percent stronger lower limb strength than those with the lowest nitrate intake. It was also found that these participants had up to a 4 percent faster walking speed.

The nitrates recorded to have the most impact on muscle strength came from leafy vegetables. While they may not be a favorite among many, they are the most important. Some of the best sources include lettuce, spinach, kale, and even beetroot.

Researchers say the next step will be to explore strategies to increase leafy green vegetable consumption in the general population.

“We are currently recruiting for the MODEL Study, which examines how knowledge of disease can be used to prompt people in making long-term improvements to their diet and exercise,” said lead researcher Dr. Marc Sim.

Many people often wonder if supplements can be taken instead of consuming leafy vegetables each day, but Dr. Sim explains: “Green leafy vegetables provide a whole range of essential vitamins and minerals critical for health.”

Americans should be consuming a variety of vegetables every day, with at least one serving being leafy greens. But vegetables don’t just work alone. Regular physical activity is needed to increase bone health. These small steps can help to ensure positive health benefits for the musculoskeletal and cardiovascular systems.