Home » Health News » Eating Eggs Could Be Good for Your Heart 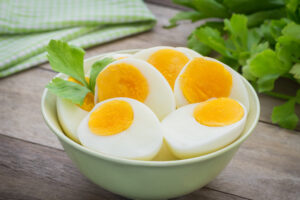 Eggs can get a bad rep because they have some naturally occurring cholesterol. But that doesn’t mean they are a risky choice. And now, a new study suggests that moderate egg consumption may help lower the risk of cardiovascular disease.

Eggs are a rich source of dietary cholesterol, but they also include a variety of essential nutrients, including vitamin D.

A new study published in eLife found that eggs can boost the number of a protein called apolipoprotein A1 – a building block of high-density lipoprotein (HDL cholesterol), or the “good cholesterol.”

Researchers looked at nearly 5,000 participants from the China Kadoorie Biobank, of which about 3,400 had cardiovascular disease, and about 1,400 did not. They analyzed blood metabolites drawn from participants and identified 24 that were associated with egg consumption.

Overall, they found that people who did not eat eggs had fewer metabolites that aided heart health and higher levels of harmful ones than those who ate eggs regularly.

Metabolites are substances used by the body when it breaks down food, drugs, chemicals, or their own tissue. The materials are then used to make energy for growth, reproduction, and maintaining health.

Researchers concluded that eating moderate amounts of eggs could contribute to heart health.

There is existing data to suggest that naturally occurring dietary cholesterol, like the kind in eggs, has a neutral effect on the body. That means it does not diminish heart health or contribute to increases in levels of dangerous cholesterol.

Including an egg or two into your daily routine can help boost the intake of several essential nutrients that contribute to better health, including “good” HDL cholesterol.

Eggs are versatile and can be used in several ways to add protein and more to your diet.