Home » Colon And Digestive » Eat this for better digestion 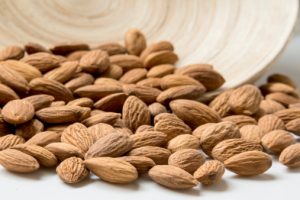 We all have those days when we feel bloated, constipated, or even have diarrhea. Digestion woes can leave us feeling not like ourselves and prisoners in our own bodies captive to never leaving the bathroom. Whether digestive symptoms happen to you sporadically or on a daily basis, the good news is, there is a superfood you can consume daily that can greatly help – and it can offer a slew of other health benefits as well.

So what is this magically food that promises to improve digestion? Well, you probably have already heard of its many other health benefits. The easy-to-consume food we’re talking about are almonds, and a recent study put them to the test, which revealed their benefits to your digestion. 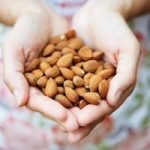 A new study funded by the Almond Board of California monitored the effects of almonds on digestion. The study consisted of a 14-week randomized, controlled, crossover study including 29 healthy parent and child pairs. Parents consumed 1.5 ounces of almonds and children consumed 0.5 ounces of almonds or almond butter integrated into their usual diet daily over the course of three weeks . This was followed up by a six-week washout period and another three weeks of their usual diet with no almonds.

Adults completed questionnaires for themselves and on behalf of their children in order to track progress.
Researchers used the Healthy Eating Index (HEI) score, which measures adherence to recommended dietary guidance. Parents and children increased their scores to 61.4, which is above national average (57.4 for adults, 54.9 for children). Participants were consuming more fatty acids, total protein, seafood and plant protein, and decreased in empty calories. When consuming almonds, participants also consumed more vitamin E and magnesium, which are essential nutrients many adults and children lack.

The researchers noted that empty calories were replaced with almonds, which could constitute for the increase.

Additionally, consuming almonds also changed gut bacteria, and in children – although they consumed fewer almonds – it led to gut microbiota being greatly affected.

Although the study revealed the positive effects of almonds on digestion and improving eating habits, the researchers did recognize limitations. For example, results were self-reported and parents could not account for what their child was eating when away from home. Although the technique is not scientifically validated, the results still show promise that almonds can have a positive effect on digestion. Future larger studies should be considered in order to confirm benefits.

In a previous similar study conducted by the Institute of Food Research, the researchers found consuming almonds increased various gut microbes including Bifidobacteria – useful in preventing diarrhea and known as good bacteria. The researchers of this study wrote, “These results indicated the stimulation effects of almond skin and almond intake were typical prebiotic effects. Any food or ingredient that reach the colon without being digested are prebiotic candidates.”

“Almond skins are 50% dietary fiber and almonds contain about 12% dietary fiber. Dietary fiber is resistant to digestive enzymes and passes undigested to the large intestine where it interacts with the intestinal mucosa and microbiota to enhance gut health.”

Both studies reveal that almonds can be beneficial to the gut and digestive health. Therefore, it may be wise that you incorporate almonds into your diet on the regular. But do be cautious, as almonds, like many other nuts, are high in monosaturated fat and calories, so there is such a thing as too much of a good thing. As long as you are consuming them in moderation, you can receive the many benefits of almonds, too,  and get your digestion back on track.