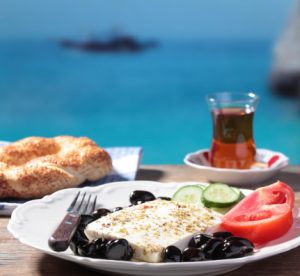 Olives, fish and fruits and vegetables, please, fill my plate!

More and more, scientists are finding that people who adopt a Mediterranean diet experience a lower risk of cardiovascular-related death than those who follow a strictly low-fat diet.

In a recent study published this February in the American Journal of Medicine, researchers analyzed data on diet and heart disease dating all the way back to 1957. Headed by Dr. James E. Dalen of the Weil Foundation and the University of Arizona College of Medicine, the team noted that earlier studies linked high levels of serum cholesterol to the higher intake of saturated fat and, subsequently, increased rates of coronary heart disease.

These findings once led to the American Heart Association advising the public to limit its fat intake to less than 30 percent of daily calories, while cutting saturated fat down to 10 percent of daily calories and cholesterol to less than 300 mg every day. Lowering your consumption of “bad” fat is helpful, but a broader diet approach is best; one that does away with “bad” fat, but includes healthy fats from avocado, olive oil, fatty fish and more.

As Dr. Dalen told Medical News Today, nearly all clinical trials since the 1950s compared usual diets to those characterized by low total fat, low saturated fat, low dietary cholesterol and increased polyunsaturated fats. “These diets did reduce cholesterol levels. But they did not reduce the incidence of myocardial infarction or coronary heart disease deaths,” Dr. Halen pointed out.

RELATED READING: The Snack That Can help You Live Longer

Based on their study, however, researchers discovered that people who took a whole diet approach, the Mediterranean diet in particular, showed a greater reduction in cardiovascular-related deaths – not to mention non-fatal heart attacks – than those who followed a strictly low-fat regimen.

Characterized by foods that are low in saturated fat but high in monounsaturated fats known to lower cholesterol, the Mediterranean diet mainly consists of fruits, vegetables, whole grains, pasta and fish, as well as vegetable and plant oils. That means eating far less meat and consuming plenty more legumes!

Traditionally, Western Europe adopted two broad approaches when it comes to diet: Northern European and Southern European. The Mediterranean diet, which is based in Southern Europe, was followed mostly by people in Crete, Greece and southern Italy. Spain, southern France and Portugal later followed suit.

First publicized by American Scientist Dr. Ancel Keys, who was once stationed in Italy, and popularized during the 1990s, the regimen is linked to a lower risk of chronic diseases, such as diabetes type 2 and cancer, as well as stronger with mental rather than physical health.

And now, consuming a host of so-called cardio-protective foods has proven to be better in the prevention of cardiovascular and heart diseases, compared to the standard low-fat, low-cholesterol diets.

This whole diet approach – with equal attention to what is consumed as well as what is excluded – promises to boost one’s chances of leading a longer, healthier life.