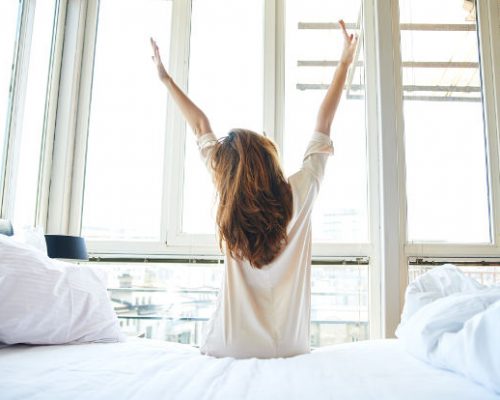 New research out of Finland suggests that early risers may be healthier than night owls and have a lower risk of obesity. The study was led by Mirkka Maukonen from the National Institute for Health and Welfare in Helsinki and found that morning people had better dietary habits and were more likely to exercise regularly than those who went to bed and woke later. These associations were attributed to both physiological and biological differences between early risers and night owls, including the production of specific hormones that affect appetite and metabolism.

The study focused on approximately 1,900 adults aged 25 to 74 who had participated in either a nutritional or heart disease study in 2007. Those in the nutritional study were made to record their daily caloric intake as well as the amount of carbohydrates, sugar, fiber, protein, fat, saturated fatty acids, and alcohol over the course of 48 hours. Meal times were also recorded for both weekdays and weekends. Those participating in the heart disease study had their sleeping habits tracked, including the number of hours they slept daily, their routine wake-up time, and when they worked or performed hard physical tasks.

In comparing the data from both studies, it was found that approximately half of the participants could be classified as morning people, while 12 percent were considered night owls and 39 percent fell somewhere between the two. The number of calories eaten daily was similar for both early risers and late risers, however, what those calories consisted of differed, as did the time of day they were consumed. Night owls ate four percent fewer calories before 10 am than their early-rising counterparts and were found to have less energy in the morning and throughout the day. They also ate fewer carbohydrates, proteins, and fats during the day, though they were found to consume more sugars. Later risers tended to consume more sugars in the morning and after 8 pm than early risers and tended to eat foods with more fat and saturated fatty acids at night.

Along with worse dietary habits, night owls were found to have more difficulty sleeping, engaging in regular physical activity, and were more likely to smoke. Maukonen commented on their findings, stating, “We found that night owls had postponed timings of food intake, and less favorable eating patterns with higher intakes of sucrose, fat and saturated fat in the evening hours than early birds.”
Lona Sandon, a registered dietician from the University of Texas Southwestern Medical Center at Dallas, was not involved in the study but offered a potential explanation for the results. She stated, “Past research has shown that hormones that impact appetite and metabolism – the way our body uses or stores energy – are produced at different levels throughout the day and night. The amount of sleep and time period of sleep may affect the production of these hormones, and therefore drive differences in appetite or food choices as well as body composition and weight.”

Researchers suggest that to improve overall health and lower the risk of obesity, those who go to bed and wake up later should try to adjust their sleep habits. While this is not always achievable due to shift work and sleep disorders, gradually changing your sleeping habits over time may lead to better health in the long run.