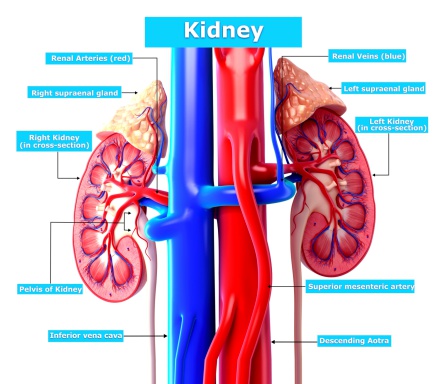 Early chronic kidney disease (CKD) diagnosis is now possible with new blood markers. Roughly 10 percent of the population is affected by chronic kidney disease, which can contribute to kidney failure, heart disease and premature death. Early detection of CKD relies on measurements of metabolic creatinine that only become elevated once 50 percent of the kidney’s function has become lost – clearly at this point the disease has progressed too far.

Researchers at the University of Freiburg, in Germany, tried to find better markers of kidney function that could detect kidney disease much sooner. They measured concentrations of nearly 500 metabolites in several thousand individuals.

Lead researcher, Anna Köttgen, M.D., said, “These markers therefore represent promising candidates to further improve the estimation of kidney function by combining them with information on creatinine concentrations. This will facilitate an improved diagnosis of CKD, enabling treatment and prevention of complications.”

The markers are called pseudouridine and C-mannosyltryptophan. The results of the study could potentially help doctors better monitor kidney patients.

The findings were published in the American Society of Nephrology.