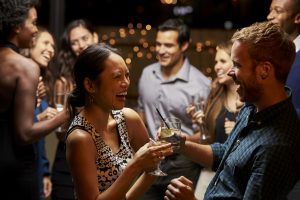 A new study has found that people who are married or in a long-term relationship drink less alcohol compared to their single counterparts. Lead author Diana Dinescu said, “Once you’re in a committed relationship, your drinking frequency declines permanently, whereas quantity goes back up if you exit that relationship.”

Although this is not the first study to show that single people drink more, it is the first to look at twins to ensure no genetic predisposition or differences in upbringing affect the results.
Dinescu added, “It seems that intimate relationships may provide a real benefit in terms of drinking behavior, maybe through mechanisms such as a monitoring effect that partners have on each other.”

The study also found that men in common-law relationships drank less than married men. Interestingly, the trend was reverse for women.

The results were recently published in the Journal of Family Psychology.