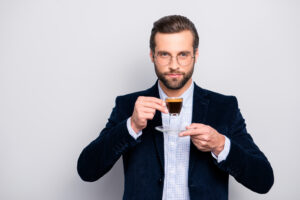 Espresso drinks are a popular choice for many coffee drinkers, but a new study has shown that they could also be linked to higher levels of cholesterol in men. The research conducted by scientists at UiT, The Arctic University of Norway in Tromsø, looked at how consuming espresso affected cholesterol levels in both men and women.

It found that drinking one cup of espresso every day increased bad cholesterol (LDL) levels in men but not in women. While more research is needed to confirm these findings, they suggest that espresso lovers should be careful about their caffeine intake if they want to keep their cholesterol levels under control.

This new study included 21,083 people with an average age of 56.4 years from theTromsø Study in Northern Norway. The researchers looked at the relationship between each level of coffee drinking and serum total cholesterol levels. Gender data was also collected to examine the difference between the findings. The reference group was made up of those who did not drink coffee.

The study concluded that drinking 3 to 5 cups of espresso each day had a link to increased cholesterol levels for both men and women. Still, there was more of a significant relationship among men. Consuming 6 or more cups of plunger/boiled coffee each day also had an effect on greater serum total cholesterol for men and women compared with people who did not drink any coffee prepared this way.

Women who consumed six or more cups of filtered coffee each day were linked with total cholesterol levels, but this increase was not found among men. For both men and women, drinking instant coffee was associated with higher cholesterol, but there was no relationship with how much was consumed.

Coffee is one of the most consumed stimulants in the world. With the number of people consuming the beverage and illness and disease rates rising globally, it is important to understand its effects on health. Even small health effects from coffee could have considerable health consequences, so it is an important topic for research.

David Kao, MD, an associate professor of medicine at the University of Colorado School of Medicine, suggests using fewer high-fat dairy products in coffee to help keep cholesterol levels down. “I would also suggest looking at the HDL, which is good, versus LDL, which is bad, rather than just the total in a case like this. If the change is all due to increased good HDL, then that is actually desirable.”

He also suggests that researchers look at other diet and lifestyle habits linked to coffee consumption when studying coffee intake. He points out that excessive fatigue may indicate another condition like sleep apnea.

As more studies are done on coffee consumption, the health risks associated with the popular beverage become more apparent. These studies are vital to helping understand who may be more at risk for effects such as increased cholesterol levels.

Cardiovascular health is crucial for living an active and healthy lifestyle as you age. Clinical Strength Cholesterol Support uses the powerful combination of Artichoke extract, CoQ10, Garlic extract, and B vitamins to support healthy cholesterol levels. By helping lower LDL (bad cholesterol) and increasing HDL (good cholesterol), this formula helps to keep your body’s cholesterol in the healthy range.

Whether you are an espresso drinker or not, it is essential to take steps to help reduce cholesterol levels. Clinical Strength Cholesterol Support uses multiple herbal extracts and vitamins to support and improve cardiovascular and cholesterol health while reducing free radical damage.