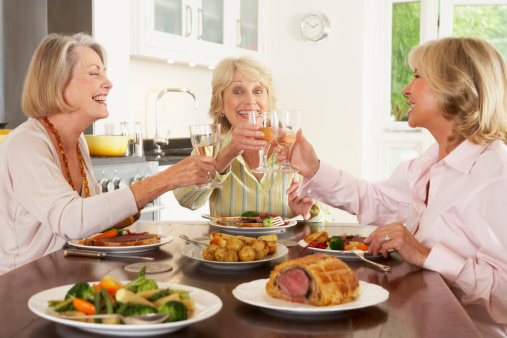 Forget about holiday seasonal guilt and raising a glass (or three) to ring in the new year. New research suggests that you needn’t lock away the bottles for the rest of the year.

Moderate alcohol consumption has its benefits; it can protect you from heart disease and reduce your risk of strokes and gallstones.

A team of researchers at the Oregon Health & Science University (OHSU) decided to dig deeper into the positive impact of alcohol. The team’s findings show that alcohol in moderation can, in fact, bolster the immune system and improve its responsiveness.

Monkeys Benefit From Moderate Alcohol, Too

To conduct their research, the team trained 12 rhesus macaques, also known as Nazuri monkeys, to drink alcohol freely. The macaques had access to a 4 percent ethanol mixture as well as food and water. Their varying levels of alcohol consumption, which mimicked  human alcohol consumption variation, led the team to divide them into two groups.

The first group consisted of “heavy drinkers” who had a blood ethanol concentration (BEC) of 0.08 percent or more. It is interesting to note that 0.08 percent is the maximum legal BEC for anyone driving a vehicle. The second group had BECs ranging from 0.02 to 0.04 percent.

Before giving the macaques access to the alcohol, the researchers observed their response to vaccinations. All the monkeys had comparable response times. After they were granted access to the alcohol, however, their immune system response times changed dramatically. When compared to a control group of monkeys that had drunk sugar water in place of alcohol, the heavy drinkers showed diminished vaccine response times. To the researchers’ astonishment, the monkeys with moderate alcohol consumption showed enhanced immune system responses to the vaccinations.

This finding reveals a facet of alcohol that has yet to be explored. The researchers stated that many of the health benefits related to alcohol consumption might be linked directly to its impact on the immune system.

Alcohol Consumption In The Real World

If there is one thing to take away from this study, it is that alcohol consumption needs to be thoroughly moderated in order for the immune system to benefit. In other words, if you don’t drink, don’t take up drinking to try to boost your health.

As in the case of the macaques, downing too many glasses can prove detrimental rather than beneficial. It could easily leave your immune system in a sluggish, unresponsive state.

People metabolize alcohol differently, so moderate consumption for you may prove too much for someone else. To stay on the safe side, limit yourself to just a glass or two of wine or a single bottle of beer per week.

This new study does not show us what component of alcohol has the immune system-enhancing properties. By isolating this component, further study can develop less controversial health supplements to give our immune systems the same supercharge.

Until then, you should feel less guilty about sneaking a glass of alcohol onto the dinner table every now and then.