Home » Health News » Does the wintertime program us to overeat? 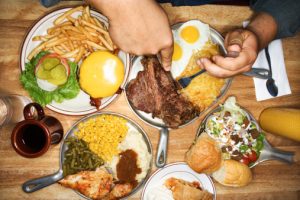 We all have a tendency to put on a few extra pounds during the wintertime but are the holidays to blame or is it the
season responsible for us to overeat?

New research suggests that evolution is to blame when it comes to overeating in the wintertime. The findings suggest that humans are “programmed” to overeat in the winter months yet we do not have anything built in to prevent us from becoming overweight or even obese. This is due to being overweight was not as threatening to our ancestors yet being underweight was. Our ancestors were very physical and so even if they put on weight it was being burned off through hunting and gathering.
Study lead author Andrew Higginson said, “You would expect evolution to have given us the ability to realize when we have eaten enough, but instead we show little control when faced with artificial food. Because modern food today has so much sugar and flavor, the urge humans have to eat it is greater than any weak evolutionary mechanism which would tell us not to.”

The researchers used a model to predict how much fat humans and other animals should store. Additionally, the model predicts that when food is harder to find that is when humans and other animals should store more fat. “Storing fat is an insurance against the risk of failing to find food, which for pre-industrial humans was most likely in winter. This suggests that New Year’s Day is the worst possible time to start a new diet,” Higginson concluded.

The findings were published in Proceedings of the Royal Society B.