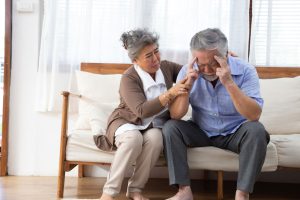 Cholesterol can play a significant role in heart health. But new data suggests it could be essential for your brain.

A new study suggests that higher “good” cholesterol levels in the fluid surrounding the brain and spinal cord may help protect against Alzheimer’s.

Researchers looked at high-density lipoprotein (HDL) concentrations – known as the “good” cholesterol – in the cerebrospinal fluid of 180 healthy volunteers with an average age of close to 77.

The findings linked a higher number of HDL particles in the fluid to two key indicators that may protect against cognitive decline and Alzheimer’s.

The first indicator was that HDL concentration was linked to better performance in thinking and memory (cognitive) skills. This association stood up after controlling for factors like age, gender, education, and whether participants carried the APOE4 gene, which is associated with a higher Alzheimer’s risk.

Another indicator that suggested a protective effect of HDL was that people with more of it had higher levels of a peptide called amyloid-beta 42 in their cerebrospinal fluid.

Interestingly, this peptide can contribute to Alzheimer’s risk when it misfolds and clumps into neurons. But when higher levels of it are circulating in the brain and spine, it is linked to a lower risk for the disease.

Ultimately, the findings of this study suggest that HDL particles may play a role in preventative treatments for Alzheimer’s before any mental decline occurs.

Identifying the issue early may lead to treatments to help boost HDL to keep the system healthy and functional.

More studies, of course, need to be completed to see how and if this is a viable treatment option.

In the meantime, you may be able to boost HDL through dietary measures. Including more healthy fats and fiber in your diet and limiting the number of processed foods and sugars known to boost bad “LDL” can help you accomplish this.