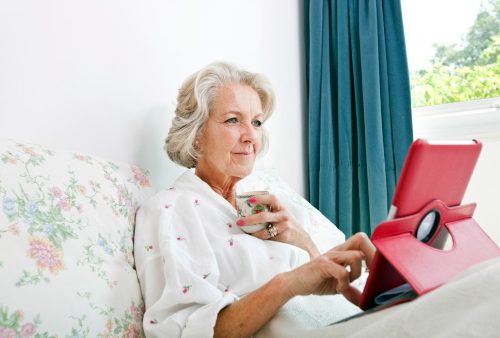 As the world around us becomes more tech-savvy, a switch to touch screens has been taking place for just about every major device. The question then arises: Does having age-related macular degeneration (AMD) affect a person’s ability to use a touch screen?

Researchers found that seniors with central vision loss due to age-related macular degeneration can still operate touch-screen devices but their abilities are slower. The research offers a way for those with AMD to better handle touch screen devices.

Age-related macular degeneration is the leading cause of vision loss, and can impact everyday tasks like driving, reading and daily chores. Editor-in-chief of Optometry and Vision Science, Anthony Adams, Ph.D., said, “The advent of digital displays and use of computer screens has opened up many new possibilities for reading activities and travel aids for AMD sufferers.”

Researchers designed an experiment to determine how AMD affected performance on touch screens. 24 older adults with AMD were asked to use and explore images on a touch screen and then drag them to corresponding images. For example, move a fish image to an ocean image.

Dr. Quentin Lenoble, lead researcher, and his co-authors wrote, “This study shows that people with AMD are able to perform a task on a touch screen. They were slower during the exploration phase, but accuracy was not affected. AMD impaired the perceptual but not the motor performance of the patients in this task.”

A noted limitation of the study was that large desktop-sized touch screens were used, so the efficiency of those with AMD on a smaller, hand-held device is still unknown. The information presented in the study is a step toward future applications specified for those with AMD. Dr. Adams concluded, “The advent of digital displays and use of computer screens has opened up many new possibilities for reading activities and travel aids for AMD sufferers. This study suggests that there can be new strategies in making touch screen scenes and materials more identifiable to the many people with low vision caused by AMD.”

The findings were published in Optometry and Vision Science.