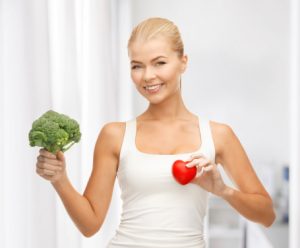 The Centers for Disease Control and Prevention (CDC) estimates that 610,000 Americans die of heart disease each year – that’s one in every four deaths.

Heart disease remains the leading cause of death in both men and women, but you don’t have to succumb to it as long as you follow these six proven steps.

Heart disease is a variety of conditions that affect the heart, from its blood vessels to defects of the heart. There are many contributing factors in the onset of heart disease.

Published in the Journal of the American College of Cardiology, a new study followed nearly 70,000 women for over two decades. What they found was nearly three-quarters of heart attacks in young women could be prevented if they would closely follow six healthy lifestyle habits. The researchers found that even if the women were at a higher risk for heart disease, for example, they had hypertension or high cholesterol, the six outlined habits could still reduce their risk. In fact, the women who most strictly adhered to the six habits reduced their risk of heart disease by 92 percent!

If six habits seems a tad daunting, don’t fret, researchers found that even if the women did one, two or even three of the habits, they still received some heart healthy benefits.

Below are the six lifestyle habits proven successful in reducing the risk of heart disease.

If you’re a smoker and only pick one habit from this list, make this one a priority – it has the biggest influence. In one study published in the European Journal of Epidemiology researchers found that those who quit smoking reduced their risk of heart disease by 40 percent within five years. Even if you’ve been smoking for a while, it’s never too late to enjoy the benefits of quitting.

Being overweight or obese increases your risk of many chronic illnesses, heart disease included. One important note is that someone can be overweight but still have a healthy heart. As long as you are exercising and eating well – two other habits we will get to later – you can still ward off heart disease.

No one has the time or energy to exercise constantly, but it’s incredibly important to fit in at least 2.5 hours a week of exercise. If you break that down over the course of the week, it works out to be a mere 21 minutes a day! Sounds a lot more doable now, doesn’t it? A study published in Circulation reported that at least 2.5 hours a week of exercise is enough to lower heart disease risk by 46 percent.

Long hours of sitting continues to be linked to poor health. If you are already sitting all day at work, don’t make things worse by plopping down in front of the TV when you get home. Better yet, if you’re not watching TV, you can exercise or socialize, both of which are shown to improve health.

First we hear drinking alcohol is good, then we hear it’s bad; for maximum benefits, it is safe to consume alcohol in moderation, which means you should have only one drink a night.

And at last we come to healthy habit number six: Eat healthy! The researchers found that the women who consumed the most fruits, vegetables, nuts, legumes and fish, and who minimized their intake of red meat and processed food, had the best heart outcomes. You may want to skip the snack aisle when you go grocery shopping from now on – your heart will thank you.