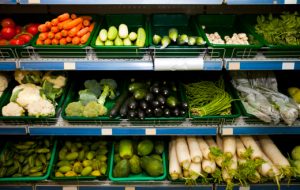 Between work obligations, social plans and family demands, it is easy to fall into what is called the “food rut.” This is when we tend to eat the same foods all the time. In many cases, it’s not the best foods because we are on the move. While this routine might be convenient, it isn’t always healthy. It can lead to health problems, including obesity, heart disease and diabetes.

Diabetes is very common in the United States. Type-2 diabetes accounts for 90 percent of all diagnosed cases of diabetes in the United States. Right now approximately 29.1-million Americans have diabetes. Much has been written about how obesity contributes to diabetes, but now evidence suggests loss of diversity in the diet may also be a contributing factor.

Diversity in our gut

Scientists at the Institute of Food Technologists in Chicago have said the human gut needs a “diverse diet” to function at its best. They believe current agricultural practices, as well as climate change are part of the reason for the loss of diversity in the diet, while about 75 percent of the population is simply just eating a limited number of animal and plant species.

Research shows diet is a regulator of the gastrointestinal tract microbiome, which contains literally trillions of bacteria. A microbiome is all of the micro-organisms and their genetic material that are present in the human body. The bacteria in the microbiome use left-overs from the digestion of food to create new signals that allow the micro-organisms to communicate with the gut.

As the Institute of Food Technologists points out, a diverse diet is required and consuming five animal species and 12 plant species just doesn’t cut it. Mark Heiman, Vice President and Chief Scientific Officer at MicroBiome Therapeutics works with the Institute and put it this way: “Like any ecosystems, the one that is most diverse in species is the one that is going to be the healthiest.”

In his research, Heiman discovered that people with prediabetes and Type-2 diabetes had a different microbiome make-up than those with no health issues. He developed a formula of inulin, beta glucan and antioxidants and tested it with a group of 30 participants. Half of the people received the formulation twice a day, while the other half received a placebo. The half on the formulation showed improved glucose control and did not feel the urge to eat. Heiman also looked at foods that were once very popular yet now are rarely consumed. He created a formulation from whole soybean pods and tested it on obese mice. It also altered the microbiome and led to health benefits.

You can alter your own microbiome or as most nutritionist would say your “gut flora” in just 24 hours. Bacteria in our intestinal tract flourish off of colorful, plant-based foods. Here are some examples of gut friendly foods that over time can help fight obesity and type-2 diabetes.

Kimchi is a fermented Korean dish made from napa cabbage, radishes, scallions and cucumber. Tempeh originated in Indonesia. It is made from cooked and slightly fermented soybeans. The soybeans are formed into a patty that looks a lot like a firm veggie burger.

Each of the above foods does something different, yet is beneficial to the body. For example, the artichokes promote the growth of good micro-organisms in your gut, while blueberries enhance your immune function and beans strengthen your intestine’s cells. Eliminate the diversity and it is easy to see how your gut health could veer off track.

Those who have diabetes are often put on the diabetes diet. This means you eat a variety of nutritious foods in moderate amounts. You maintain regular mealtimes and include a lot of fruits, vegetables and whole grains in your diet. Some people believe we should all be following the diabetes diet for good health. Unfortunately, many people don’t change their eating habits until they do discover a health problem.

It is hard for people to change their eating habits overnight, but the researchers at the Institute of Food Technologists are hoping their study results encourage people to take a closer look at the food they eat and how they can get more diversity in their diets. They say people need to focus less on fad diets and eliminating certain foods and concentrate more on what new, helpful foods they can add to their diet.

Have you heard that you should eat several small meals a day to maintain stable blood sugar and lose weight? That notion has made the rounds, and likely endorsed your daily snacking routine (and those handy 100-calorie packets!)…Continue reading