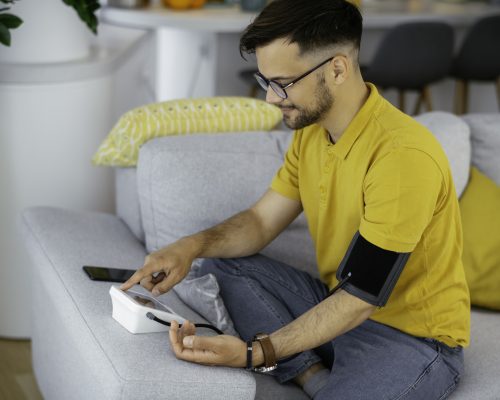 Blood pressure is a topic of much discussion in the health world. High blood pressure is one of the leading causes of heart disease and can contribute to many other health risks. New research has now found that a difference in blood pressure readings between arms could signal a higher risk of death.

The study was led by the University of Exeter, which merged data from 24 global studies to create a database of nearly 54,000 people. Participants included in the study were from Europe, the US, Africa, and Asia, and all had information available for blood pressure readings in both arms. This information was tracked over ten years and included the number of deaths, heart attacks, and strokes that occurred.

International blood pressure guidelines currently advise health professionals to measure blood pressure in both arms, but this is widely ignored. This new study shows the importance of taking both readings and has found that by doing so, the ‘normal’ upper limit of blood pressure is much higher than it should be. This new information could lead to a change in international hypertension guidelines, meaning more at-risk patients could be identified.

Lead author of the study Chris Clark said, “We’ve long known that a difference in blood pressure between the two arms is linked to poorer health outcomes. The large numbers involved in the INTERPRESS-IPD study help us to understand this in more detail. It tells us that the higher the difference in blood pressure between arms, the greater the cardiovascular risk, so it really is critical to measure both arms to establish which patients may be at significantly increased risk. Patients who require a blood pressure check should now expect that it’s checked in both arms, at least once.”

The study concluded that each mmHg difference found between the two arms elevated the predicted 10-year risk of angina, heart attack, or stroke by one percent. Currently, guidelines recognize a systolic difference of 15 mmHg or more between the two arms as the threshold indicative of additional cardiovascular risk. As this is far from the threshold found in this study, researchers believe far more people should be considered for treatment if such a difference between arms is present.

To help with this common problem of blood pressure readings taken only in one arm, researchers have created a tool that is easy for clinicians to use to establish who should be considered for treatment based on their risk. This tool incorporates reading blood pressure in both arms.

With this new tool and some new clinical practice guidelines in assessing cardiovascular risk, more people could be considered for treatment that could reduce their risk of heart attack, stroke, and death.