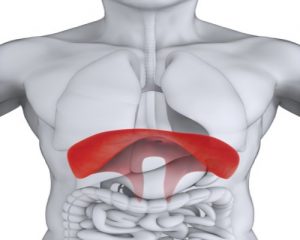 Diaphragm pain affects the dome-shaped muscle that separates the thorax (chest) from the abdomen. This muscle plays an important role in the breathing process. When we take a deep breath in, our diaphragm decreases the amount of pressure in the lungs and expands the ribs, allowing the lungs to fill up with air. When we exhale, the diaphragm relaxes, elevating back into its original position due to its elastic nature as air exits the body. It then rests in its normal dome-shaped position until another breath is taken.

Diaphragm muscle pain can be a symptom of many different medical problems and is a common complication during surgical procedures. However, in many cases, pain in the diaphragm is unknown.

The muscles of the diaphragm originate along the lumbar vertebra of the spine (lower back area), the inferior border of the ribs (at the 6th rib level) and sternum (breastbone). An opening exists in the middle portion of the diaphragm to for structures such as the esophagus, the descending aorta, and the vena cava vein to pass through between the thoracic and abdominal cavities. Nerves such as the phrenic and vagus nerves also pass through this opening.

The diaphragm effectively makes up the floor of the thoracic cavity with its contractions as we inhale, drawing it down into the abdominal cavity, allowing the thoracic cavity to become deeper and larger as it draws air from the surrounding atmosphere.

The function of the diaphragm allows for several actions that are important for several expulsive acts. These include coughing, sneezing, vomiting, and even expelling feces. It is also believed that the diaphragmatic spasm upon breathing in air can lead to the development of hiccups.

It can be very difficult to diagnose diaphragm pain without the aid of a medical professional, as the condition often presents as an additional symptom of a preexisting condition. However, feeling pain during exhalation may indicate diaphragmatic pain, while pain felt during inhalation may be more likely due to problems with the abdominal muscles. Diaphragm muscle strain symptoms can be described as being sharp or stitching in nature. Diaphragm pain causes may include the following medical conditions.

Appear at birth with the majority of cases having unknown origins.

Appear after certain types of injuries or trauma. This includes being a post-operative complication for injures mistakenly caused by doctors during procedures (iatrogenic). Sometimes, it is not known why diaphragm pain occurs (idiopathic)

Diaphragm pain treatment will often depend on the underlying condition leading to its development. This may involve surgical correction for congenital and acquired forms, neurologic medication and physical therapy for the treatment and prevention of stroke and disorders of the spinal cord, or even implanting a phrenic nerve pacemaker for the treatment of phrenic nerve neuropathy.

Once the appropriate treatment has been implemented for your particular case of diaphragm pain, symptoms will often subside as the recovery process continues. However, it is important to stay in close contact with your doctor as it is possible for hernias to recur and other treatment modalities to fail if not strictly adhered to.