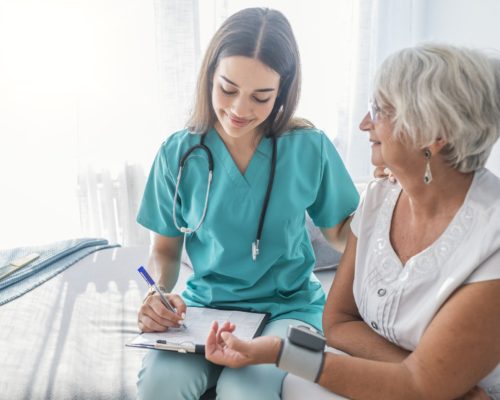 According to a recent study published in the American Heart Association’s journal Hypertension, people with type 2 diabetes who received intensive treatment to keep their blood pressure levels at 130/80 mm/Hg or below had fewer strokes, heart attacks, and other diabetes complications, regardless of pre-existing cardiovascular risk.

Type 2 diabetes affects more than 420 million people worldwide, but there has been some ongoing confusion as experts differed over optimal blood pressure targets for people with diabetes and the safety of treatment for hypertension. This new study has been able to shed some new light on blood pressure targets and could help settle conflicting guidelines for the treatment of hypertension in those living with type 2 diabetes.

The Hypertension study was based on the analysis of among nearly 11,000 patients with type 2 diabetes followed over four years across 215 clinical centers and in 20 countries.

The researchers looked at outcomes between moderate to high cardiovascular risk people with type 2 diabetes and hypertension who were either receiving anti-hypertension treatment or a placebo. This trial had reported a benefit for additional hypertension treatment, but it was not known whether it also applied to those with diabetes who had blood pressure below 140/90 mmHg.

To determine treatment benefit, the study compared rates of overall death from any cause as well as the rate of major vascular events, including heart attacks, diabetes-related kidney disease, stroke, and diabetes-related eye damage.

The study showed that both patients with a lower baseline risk for cardiovascular disease and those with a higher risk benefitted from more intensive treatment. In addition, those with diabetes and with blood pressure in the 130/80 mmHg to 140/90 mm/Hg range before starting the trial benefitted from more intensive therapy, achieving lower blood pressure during the trial.

“Patients, including those with diabetes, with blood pressure levels above 130/80 on two consecutive checks should discuss with their physicians whether they need change in treatment to get to a lower number,” said study senior investigator J. Bill McEvoy, professor of preventive cardiology at the National University of Ireland.

Overall, the study results suggest that aiming for blood pressure levels of 130/80 mm/Hg or lower can benefit those at various degrees of hypertension and with elevated cardiovascular risk, even those with type 2 diabetes.