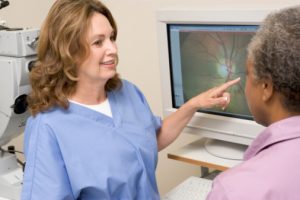 Vision loss in diabetic retinopathy patients can be prevented with an advanced version of an anti-inflammatory molecule present in our body. Diabetic retinopathy is the leading cause of vision loss in diabetics as high levels of glucose damage the nerves behind the eyes. Scientists have developed a man-made version of soluble gp130, or sgp130, that is 10 times more powerful than the natural one. This “upgraded” molecule can reduce inflammation in the eyes as a result of diabetes.

High levels of blood glucose trigger high levels of immune protein IL-6 (associated with inflammatory response) circulating in the blood and in the fluid part of the eyes in diabetic retinopathy patients. As the levels of IL-6 increase, so does the levels of its receptor IL-6R, which is necessary for IL-6 to be active.

These circulating inflammation drivers trigger trans-signaling (when receptors aren’t present on the affected cells directly), which plays a large role in inflammation-driven diseases (e.g., diabetic retinopathy), according to Dr. Sharma.

In response to trans-signaling, the body releases sgp130 into the bloodstream to trap IL-6/IL-6R and prevent them from causing inflammation. Unfortunately, this mechanism is not always working in the case of diabetes. And this is why Dr. Sharma and her team worked to develop a more powerful version of sgp130 in order to curb inflammation.

Scientist Dr. Shruti Sharma explained, “What we are trying to do is inhibit this pathway so there will be no more signaling.”

The next step in the research is testing out the effectiveness of this man-made sgp130 in preventing diabetic retinopathy in both mice and human models. If successful in clinical trials, this version of sgp130 may one day be used as a form of treatment to treat or prevent diabetic retinopathy.