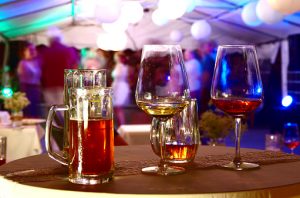 A new study revealed that your risk of developing diabetes may be reduced with moderate alcohol consumption. The study found that men who consumed 14 alcoholic beverages a week and women who consumed nine had the lowest risk of type 2 diabetes in comparison to nondrinkers and those who drank more.

The highest benefits were seen among alcoholic drinkers who spaced out their drinking over the course of a week as opposed to binge drinking in a night or two.

Senior researcher Janne Tolstrup explained, “Drinking pattern seemed to play a role in the risk of diabetes. Drinking frequency was important, as those who were drinking three to four times per week had lower risk as compared to those drinking only once per week—regardless of the total weekly amount.”

The most beneficial alcohols to help reduce the risk of diabetes were wine and beer. Hard liquor showed no benefit to men and may increase the risk of type 2 diabetes among women.

Some experts suggest that individuals shouldn’t take up drinking alcohol as a means of reducing the risk of type 2 diabetes. Dr. Adrian Vella of the Mayo Clinic explained, “I wouldn’t recommend increasing alcohol consumption on the basis of this study.”

Not cause and effect

It’s important to note that the study did not prove cause-and-effect between diabetes risk and alcohol consumption, but merely an association.

The study explored data collected from over 70,000 Danish persons. Details of their alcohol consumption were recorded along with lifestyle habits and overall health status. The average follow-up of the participants was five years.


Type 2 diabetes risk was found to be lower among those who spaced out their drinking over the course of three to four days a week as opposed to drinking all those beverages in one night. Among men and women who drank alcohol at least half the days of the week, the reduced risk of type 2 diabetes was 27 and 32 percent respectively.

Wine appeared to offer the greatest benefits of reducing the risk of diabetes among both men and women, and beer showed no benefits in women but did in men.

The researchers are still unsure as to why or how alcohol reduces the risk of type 2 diabetes, but as Tolstrup explained, “Alcohol has been suggested to increase insulin sensitivity and lower fasting insulin resistance, which might play an important role in the progression of diabetes. But again, due to limited knowledge about mechanisms between alcohol and [blood sugar] control, the mechanism explaining our results is not clear.”

Mayo Clinic’s Valla suggests that the observational study may be flawed, as people may not have complete recollection of what they ate and drank. Lastly, Valla suggests that five years is too short of a follow-up period for cases of diabetes to develop. Needless to say, additional research is required.