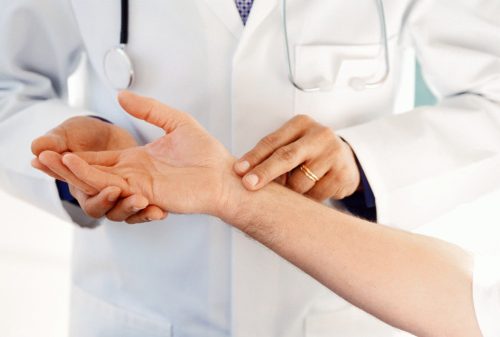 Checking your pulse can be easily done, using the index and middle fingers to press on the radial pulse (on the wrist) or the carotid pulse (on the neck). However, it could be that your fingers themselves hold the key to determining not just your heart rate, but also your heart health.

Click here to find out how you can maintain and support your cardiovascular health.

Heart disease is one of the most common causes of death in the world – it is actually the leading cause of death in the United States. Approximately 1 million deaths are caused by heart disease each year in the U.S. alone—which is more than the amount of deaths caused by cancer and AIDS combined. It is estimated that more than 920,000 Americans will suffer from a heart attack this year, with 680 deaths each day – or 250,000 each year. More than 80 million Americans have some form of heart disease, and cardiac disease costs the United States nearly $450 billion each year.

It is therefore understandable why so much effort is being invested into measuring heart health, with the goal of being able to prevent millions of heart attacks every year.

A new technique has been created to measure aortic stiffness, which is one of the most common factors for heart disorders. When the aorta stiffens, it is unable to pump blood properly. The reduction in function can lead to high blood pressure, strokes, or heart attacks. Gary Pierce, Assistant Professor in the Department of Human Health and Physiology at the University of Iowa, has developed a new technique, which involves the use of a simple instrument called a transducer.

The instrument is placed on the finger, or on the brachial artery located on the arm above the elbow. The transducer reads the subject’s pulse, and the information is combined with the person’s Body Mass Index (BMI) and age to determine the health of their aorta. This device will enable doctors to determine whether or not the aorta has stiffened – alerting them of a patient’s risk of heart disease.

The current technique used to test aortic stiffness involves taking measurements of the carotid artery (in the neck) or the femoral artery (in the groin). The problem with these measurements is that it can often be difficult to take the femoral pulse, particularly in patients that are obese or significantly overweight. However, the new technique eliminates the difficulty, as the transducer is simply placed on the finger or on the upper-arm, taking an accurate readout quickly and easily.


The Revolutionary Technique for Your Heart Health

The problem with heart health conditions is that they’re very difficult to diagnose without invasive testing, and by the time the average person discovers that they have a heart condition or heart disease, it’s too late. Thanks to this new method of testing, doctors can easily take diagnostic measurements of their patients – particularly those over the age of 35 or 40. Middle-aged and older patients are usually much more likely to develop heart conditions, but this new technique will allow doctors to catch the problems before they become too serious.