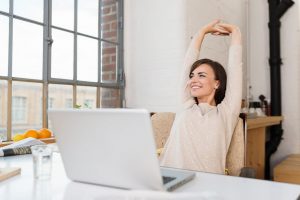 According to a new study from The BMJ, people who have mentally stimulating jobs have a lower risk of dementia as they age. The relationship between dementia and a job that someone holds is believed to be due to lower levels of specific proteins that may prevent brain cells from forming new connections.

Previous research has shown that cognitive stimulation can prevent or postpone dementia. However, recent long-term studies have suggested that leisure time cognitive activity does not reduce the risk of dementia, but workplace exposure may.

Still, no studies have been able to produce compelling evidence of the benefit of cognitive stimulation at work. This is what led a team of international researchers to examine and identify protein pathways for this association.

At the start of the study, cognitive stimulation at work was measured, and participants were tracked for an average of 17 years. These findings were based on studies from the United Kingdom, the United States, and Europe, which looked at relationships between work-related factors and chronic diseases, disability, and mortality.

After adjusting for potentially influential factors such as age, sex, education, and lifestyle choices, the risk of dementia was found to be lower for participants with high to low mentally stimulating jobs. Cognitive stimulation was associated with lower levels of three proteins linked to cognitive stimulation and dementia. This helps researchers to provide possible clues to underlying biological mechanisms.

This association did not differ between men and women or according to age, but there was an indication that the association was stronger for Alzheimer’s disease than for other dementias. The findings remained even after further adjustments for various established dementia risks, including diabetes, coronary heart disease, and stroke.

“The findings that cognitive stimulation is associated with lower levels of plasma proteins that potentially inhibit axonogenesis and synaptogenesis and increase the risk of dementia might provide clues to underlying biological mechanisms,” researchers concluded.

This study is a reminder that more extensive, population-based studies are needed to understand the complex relationships between dementia and cognitive stimulation. With an aging population and a rise in dementia, it is vital to continue the work that has so far remained unclear.