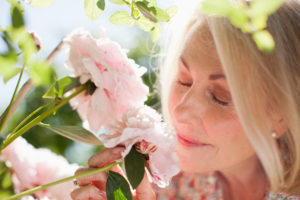 Within the United States, there are at least five million people currently living with age-related dementia. As the population increases, these numbers are expected to rise. Therefore, it is imperative for researchers to analyze biomarkers that could indicate a cognitive decline.

A new study from UC San Francisco has identified how some seniors’ sense of smell may be able to forecast their risk of developing dementia. Researchers found that those who can identify smells like roses, turpentine, lemon, and paint-thinner and who have retained their sense of vision, hearing, and touch may have half the risk of developing dementia compared to their peers with limited senses.

For the study, researchers tracked close to 1,800 participants in their seventies for a period of up to 10 years. At the start of the study, all participants were dementia-free, but 328 developed the condition throughout the study.

Out of the participants whose sensory levels ranked in the middle range, 141 of the 328 developed dementia. This compared with 83 in the good range and 104 in the poor range.

“Sensory impairments could be due to underlying neurodegeneration or the same disease processes as those affecting cognition, such as stroke,” said first author Willa Brenowitz, Ph.D., of the UCSF Department of Psychiatry and Behavioral Sciences. “Alternatively, sensory impairments, particularly hearing and vision, may accelerate cognitive decline, either directly impacting cognition or indirectly by increasing social isolation, poor mobility and adverse mental health.”

Previous research has generally focused on the link between dementia and individual senses. This study was centered around the additive effects of multiple impairments in sensory function, which experts believe are a more reliable indicator of declining cognition.

The authors of the study have acknowledged that a robust sense of smell has a stronger association against dementia than touch, hearing, or vision. Participants whose smell declined by 10 percent had a 10 percent higher chance of dementia, versus a 1-to-3 percent increase risk for corresponding declines in hearing, vision, and touch.

“The olfactory bulb, which is critical for smell, is affected fairly early on in the course of the disease,” said Brenowitz. “It’s thought that smell may be a preclinical indicator of dementia, while hearing and vision may have more of a role in promoting dementia.”

Overall, researchers concluded that participants who remained dementia-free had generally higher cognition at enrollment and tended to have no sensory impairments. Participants in the middle range showed mild impairments, and those who had the highest risk had multiple moderate-to-severe impairments.

Health care providers agree that regular physical exercise has known benefits which can help to prevent or slow cognitive decline. A diet low in fat and rich in fruits and vegetables is another heart-healthy choice that also may help protect cognitive health. Getting regular hearing tests and eye checkups are also highly recommended to help keep sensory levels at a healthy level.