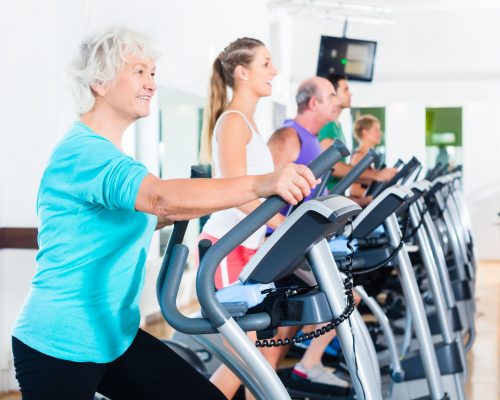 Aerobic exercise may help ward off dementia, according to research findings. The study involved 16 people who performed various aerobic exercises such as using a treadmill, elliptical, or stationary bike. The participants worked out four times a week for the duration of six months. The study also included a control group of 19 individuals who completed stretching exercises for the duration of the study.

All of the participants had mild cognitive impairment and underwent brain scans after the study. The researchers found that those who partook in the aerobic exercise had greater increase in brain volume, compared to the stretching group. Furthermore, the aerobics group showed greater improvements in thinking and memory.
Lead investigator Laura Baker explained, “Even over a short period of time, we saw aerobic exercise lead to a remarkable change in the brain.”

Coauthor Jeongchul Kim added, “Any type of exercise can be beneficial. If possible, aerobic activity may create potential benefits for higher cognitive functioning.”

The present research adds evidence to the fact that exercise can offer benefits to the brain – as well as muscles.

In dementia patients, depressive symptoms may be reduced with high-intensity exercise and group activities