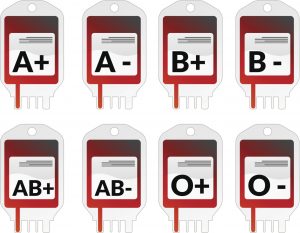 Memory loss and dementia are issues that plague so many of us as we age but now researchers have found having a particular blood type may determine your risk of developing such conditions.

There are other factors which contribute to memory loss aside from blood type and scientists continue to point out ways to prevent the decline that is seemingly a natural part of aging. You need to keep stress and blood sugars relatively low, and of course, absolutely no smoking.

A new study by the National Institutes of Health (NIH) and the U.S. Department of Health and Human Services has revealed that people with blood type AB, in particular, are 82 percent more likely to have thinking and memory problems leading to dementia. The study was published in the journal Neurology.

Of the people who didn’t have memory problems at the beginning of the study, 495 participants developed thinking and memory issues, researchers say.  The study by the NIH was based on a larger one of more than 30, 000 people who were tracked for an average of 3.4 years; the Reasons for Geographic and Racial Differences in Stroke (REGARDS) study looked primarily at blood types and the association with memory issues.

Those with blood type AB made up roughly 6 percent of the study group. They were then compared to 587 other people who didn’t show signs of cognitive problems.

Researchers also looked at the blood levels of a protein that helps with blood clotting, called factor VIII, and high levels of it can increase the risk of cognitive impairment and dementia. The study participants (all blood types) who had higher levels of this protein were at least 24 percent more likely to have thinking and memory difficulties compared to those with lower levels.

Participants with blood type AB had a higher level of factor VIII than those with other blood types, putting the AB blood type at a heightened risk for memory problems, according to the research. So the AB blood type plus VIII was really the double whammy of bad luck coming in the form of an increased risk.


Four main blood types: Which type are you?

Generally, the type of blood you have all depends on whether or not you have proteins – called antigens – in your red blood cells. And it’s your blood type that’s passed down from your parents, along with other genes.

Altogether, there are four main blood types: Type A, type B, type AB and type O, which is the most common. About 38 percent of people in the United States have O positive blood; the A positive blood type pulls up in close second with 34 percent.

Factors that increase the risk of cognitive impairment and dementia

As lead author Dr. Mary Cushman, of the University of Vermont’s College of Medicine, told Medical News Today, the blood type AB is rare and only found in about 4 percent of Americans.

People with the AB type are 82 percent more likely than other types to develop the thinking and memory problems that can lead to dementia.

The positive news comes in the form of the O blood type.

Previous studies have shown that people with blood type O have a lower risk of heart disease and stroke. These are factors that can increase risks for memory loss and dementia. There’s also evidence that men with an O blood type have a lower chance of developing prostate cancer.

This means that if an individual’s blood type is related to vascular conditions (such as stroke) then the connection between those issues and brain health can be drawn more easily. The difficulty becomes, you can’t exactly change your blood type to prevent any future issues. But the potential of this research shows that with the new information in mind, it may be possible to intervene sooner.

While the results of this latest study are fascinating, more research will need to be done to make a more definitive link between specific blood types and memory.

For now, it’s best to be proactive. If you are starting to feel your memory slipping and have concerns, talk to your doctor about it sooner than later – no matter what your blood type.