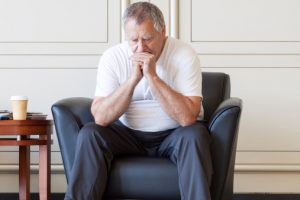 A new study has shown a link between depression and dementia. But is depression the result of dementia, or is it the other way around? Or do both problems develop from the same underlying issues in the brain?

Inquiring minds wanted to know and these questions were recently answered in a study by Chicago’s Rush University Medical Center and published in the journal Neurology. Researchers here determined that the link between depression and dementia is completely independent of brain changes caused by dementia.

Study author Robert Wilson looked at 1,764 people with an average age of 77 who were a part of the Religious Orders Study (where more than 1,100 older nuns, priests, and brothers have agreed to medical and psychological evaluation each year and brain donation after death) and the Rush Memory and Aging Project (the ongoing study of seniors to better understand the memory, mobility, and strength challenges that often come with aging).

All of the participants were free of any memory or thinking problems at the time. Every year, for an average of 7.8 years, they were examined for signs of depression, such as reduced appetite and loneliness. They also participated in tests gauging their memory and overall cognitive skills.

During the course of the study, 680 people died. Autopsies were performed on 582 bodies in order to pinpoint brain plaques or tangles associated with dementia, or other types of brain damage.


Depression, dementia, and the link to brain damage levels

Researchers came to this conclusion because the participants who developed dementia were also more likely to experience a higher level of depression before their dementia diagnosis. But following their diagnosis, the depression tended to be reduced significantly.

As a result, a higher level of depressive symptoms was associated with faster cognitive decline, according to study authors.

So if you can’t kick that low mood, you could be putting yourself at risk for dementia. It’s important to ask for help from your doctor.

Depression: a risk factor for dementia

As it turns out, early-onset dementia and depression share similar symptoms. There’s the social withdrawal, memory problems, loss of interest in once-enjoyable activities and hobbies, sleeping too much or too little, and impaired concentration. It can be difficult for physicians to tell the two disorders apart. In addition, many people with dementia are also depressed, which adds another level of confusion in diagnosing.

Commenting on the study results, the author told Medical News Today: “These findings are exciting because they suggest depression truly is a risk factor for dementia, and if we can target and prevent or treat depression and causes of stress, we may have the potential to help people maintain their thinking and memory abilities into old age.”

I think we’d all like to keep our faculties intact and well-oiled as we get older. We should enjoy our golden years!

The risk of dementia in older adults is lower among those with healthier arteries, according to new findings. The findings come from researchers at the University of Pennsylvania where they uncovered those seniors in their 80s and 90s who were free of calcium buildup in their arteries had a lower risk of dementia compared to those with calcium buildup. Continue reading…

This common medication increases your risk of dementia

If you suffer from heartburn, you probably take a class of medications known as proton pump inhibitors (PPIs). This class of drugs works to relieve heartburn by reducing the amount of acid in the stomach. Heartburn feels like a burning sensation in the chest, behind the breast bone. This sensation can become worse when you are in a lying down position or bent over. Continue reading…