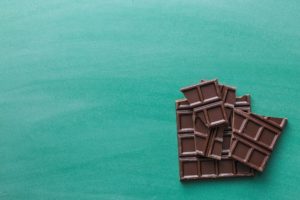 Those who suffer from depression may find that indulging in chocolate could help lower symptoms. A new UCL-lead study found that dark chocolate, specifically, may positively affect mood and relieve depressive symptoms.
Although gorging on chocolate to beat the blues has become cliché thanks to romantic comedies, there may be a reason we are hardwired to reach for the sweets. According to a study published in the Archives of Internal Medicine, people who feel depressed eat about 55 percent more chocolate than their non-depressed peers. And the more depressed they feel, the more chocolate they tend to eat.

This may be why a research team from UCL worked in collaboration with others from the University of Calgary and Alberta Health Services Canada to create the first study to look at the association between depression and the type of chocolate consumed.

Published in the journal Depression and Anxiety, the teams assessed data from 13,626 adults form the US National Health and Nutrition Examination Survey. Participants from the study filled out questionnaires that tracked their chocolate consumption against their score of depression symptoms.

Overall, it was found that individuals who reported eating dark chocolate in two 24-hour periods had 70 percent lower odds of experiencing depression symptoms than those who reported not eating any chocolate at all. Participants who ate the most chocolate, regardless of kind, were also less likely to report any depressive symptoms. However, researchers found no significant link between milk chocolate and depressive symptoms.

This cross-sectional study did consider a range of factors. These included weight, height, marital status, ethnicity, household income, education, physical activity, smoking, and chronic health problems. This was to ensure the study only measured chocolate’s effect on depressive symptoms.

The study’s lead author Dr. Sarah Jackson from the UCL Institute of Epidemiology & Health Care said: “This study provides some evidence that consumption of chocolate, particularly dark chocolate, may be associated with reduced odds of clinically relevant depressive symptoms.”

“However further research is required to clarify the direction of causation – it could be the case that depression causes people to lose their interest in eating chocolate, or there could be other factors that make people both less likely to eat dark chocolate and to be depressed.”

Dark chocolate is known to have a higher concentration of flavonoids, which are antioxidant chemicals that have been shown to improve inflammatory profiles. These profiles have been linked to the onset of depression. Chocolate also contains several psychoactive ingredients which have been shown to produce a feeling of euphoria, similar to that of cannabinoid, which is found in cannabis. It also contains phenylethylamine, a neuromodulator which is believed to be essential for regulating people’s moods.

It was noted that mood improvements only take place if the chocolate is pleasant to eat, which suggests that enjoying the chocolate is an important part of using chocolate for depression, not just eating it for the ingredients. While more research is needed to understand these findings completely, this new information could help many people who suffer daily from mood disorders including depression.