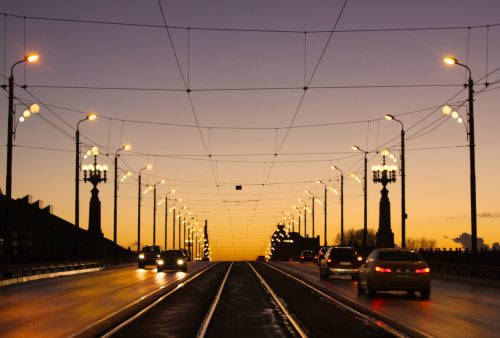 For most of us, buying a house or downsizing to a condo, ranks right up there with naming our first-born. It’s one of the most important decisions of our lives, and we invest a great deal of time in making sure we finally end up with one that has everything we are looking for – the right number of rooms, good neighborhood, easy commute. All within a specified budget.

As you likely know, it is not easy to check off all of these boxes and, to make matters worse, there is one more box that needs to be ticked – proximity to high voltage power lines.

Not the hydro lines running along the street, but those fields of high voltage transmission towers reaching to the sky in row formation. They’re more than an eyesore, if you’re living in a subdivision next door. They could be a potential threat to your health.

RELATED READING: Boost Your Immune System With The ‘Mother Of All Antioxidants‘

There’s been a lot of talk about electromagnetic fields (EMFs) and the bad effects of radiation from high voltage lines. The question is, is there any truth to it? Or is it just unnecessary fear-mongering by certain companies that sell you electronic gadgets that supposedly protect you from radiation? Or is it a ploy by the real estate industry to charge high premiums for a “need” that really isn’t a need?  The bigger question is, will your health be better off in a house that is located far away from those high voltage towers? Let’s put the facts into perspective.

What exactly is EMF, anyway? It’s the abbreviation for Electro-Magnetic Field. EMFs are invisible forces that surround electrical equipment, power cords and electricity carrying lines, including outdoor power lines. There are two types of EMFs: Natural EMFs are the kind produced by the Earth and, believe it or not, even by the human body; they’re part of the natural chemical reactions that take place, such as brain activity, digestion, and your pumping heart. You create an EMF of about 10 hertz! Then there are the artificial EMFs, from hair dryers, cell phones, toasters, computers and high voltage wires.

Every time you use electricity and electrical appliances, you are exposed to artificial electric and magnetic fields at extremely low frequencies, below 300 hertz, that are considered extremely safe levels. More specifically, electric fields happen when you plug a wire into an outlet, even if the appliance is not turned on. Magnetic fields are formed when you actually are using a device, so electric current is flowing into the device.
Before we go any further, here is an interesting fact: We’re exposed to 100 million times more artificial EMF radiation today than a century ago, and that number is growing each year. Some call our modern conveniences progress, making life easier and more efficient, but at what cost?

One thing’s for certain: EMFs are strongest when you’re close to their source. As you go further from the source, the strength of the fields decreases rapidly. This means the strongest EMFs are right beside a transformer box or right under a high voltage power line, and they become weaker as you move away.

But that’s only half the story.

The thing is, any object, such as the walls of buildings, trees and even the ground where power lines are buried can block electric fields. So, when you are inside your home, the magnetic fields from high voltage power lines and transformer boxes are very weak. In fact, they are often weaker than the electromagnetic fields that come from your household electrical appliances.

That’s right. On a daily basis, most of us are exposed to EMFs caused by household wiring, lighting and any electrical appliance that plugs into the wall, including vacuum cleaners, electric barbecues and even toasters. In the workplace, EMFs can be created by computers, air purifiers, printers, electric tools and so on.

There have been many studies to find out the adverse health effects from exposure to EMFs – cancer, brain tumors, anxiety – but there is no concrete evidence, according to the World Health Organization and the U.S. Environmental Protection Agency. EMFs cause weak electric currents to flow through the human body, but the intensity of these currents is too low, many experts say, for concern.

That said, why take the risk? A U.K. study in 2005 found a 23 percent increase in childhood leukemia for those living between 200 and 600 meters (281 and 656 yards) from high voltage power lines. The debate could follow the path of smoking cigarettes, with one study confirming the risks and another disproving the dangers until eventually the truth surfaces.

And just like there are people hypersensitive to peanuts or gluten, there are people who are hypersensitive to electromagnetism, although the condition isn’t recognized by the medical community. These people experience headaches, fainting spells and extreme irritability when they are exposed even to the low frequency EMFs. Some of them have taken an extreme step to avoid them: They’ve moved to Green Banks, a small town in West Virginia where WiFi, TV, radio, cell phones and Bluetooth are banned. Yes, there is life without cell phones! The town of roughly 149 people lies in the middle of the 13,000-square mile National Radio Quiet Zone dedicated to scientific research.

Green Banks is home to the largest steerable telescope in the world, requiring absolute radio silence to do its work. Because of its size and reach, it can detect faint radio waves from distant celestial objects. Its steerable dish allows it to see an unprecedented 80 percent of the sky, making it versatile for several types of research, such as astronomy, astrochemistry and astrophysics, not to mention the search for intelligent life. X-Files fans, keep the faith! Scientific American reports that NASA’s Kepler spacecraft has discovered planets that appear to orbit at a temperate, potentially life-enabling distance from their host stars. The Green Banks Telescope, to that end, has the ability to detect the radio waves from these planets that may be signs of intelligent life.

RELATED READING: 7 Reasons Your Home Isn’t As Safe As You Think

The town of Green Banks, accordingly, has outlawed the use of electronic transmitting devices, and a police officer actually patrols the streets looking for wireless signals.

That makes modern life less connected for the residents of the town, but it’s also looked at as a positive by many who began flocking here in the mid-2000s to get away from all the technology. Those residents hypersensitive to EMFs claim they’ve found relief, although they have internet access at the mercy of dial-up speed.

As a doctor, I believe the stress from worrying about EMF could be greater than EMF itself. I would caution against moving right next to those high voltage transmission towers, but unless you’re planning on living completely off the grid, Fred Flintstone-style, or heading to Green Banks, you’re going to experience some exposure.

By the same token, I’m not saying you just live with EMFs and do nothing about them. I recommend making small healthy choices that will reduce the exposure. Small things will make a huge difference in the long run.

Give your body adequate nutrition that can help flush out the toxic metals. Exercise to boost your immune system and keep strong. Drink lots of water to help with your body’s natural detoxification, and supplement your diet with healthy natural supplements from trusted sources. And while we are on the topic of metals, it would help to avoid metal jewelry and piercing.

Next, unplug all your gadgets when not in use, and use them a little less often! Build in some non-gadget activity into your day, by walking the neighborhood or park with a friend, or taking your dog to the lake for a swim. We don’t have to abandon our modern conveniences by any means, but we can take technology breaks to unplug.

Create distance between you and the EMF source, and minimize the time you spend exposed to the source. That means, position your chair or couch further from the TV, for example, and don’t watch your programs every night of the week.

The same goes for your computer and cell phone. As much as possible, replace talking on phones with texting. It’s safer! And opt for hands-free devices when talking on your wireless or cellular phone. The electromagnetic radiation that they give off takes the form of radio-frequency energy and, although studies are still inconclusive on the negative health effects caused by the radiation from cell phones, keeping the phone away from your brain is an easy safeguard to implement.

And, yes, introduce your children and grandchildren to play that does not involve the play button.