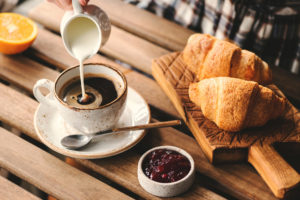 Atrial fibrillation (also called AFib or AF) is the most common cardiac arrhythmia, which involves the two upper chambers of the heart producing a quivering or irregular heartbeat. It can lead to blood clots, stroke, heart failure, and other heart-related complications.

With over 2.7 million Americans living with AFib, physicians are eager to find treatment options and lifestyle changes that could reduce the risk. A satisfying relationship between coffee consumption and AFib has come to light, and many studies have been conducted.

Unfortunately, there is no concrete evidence, but some studies have suggested that coffee consumption may have a protective effect. Coffee drinkers are not at any higher risk for Afib.

Afib can be affected by various risk factors including blood pressure, cholesterol, blood vessel dilation, and homocysteine levels. While more research is needed, these various studies offer an insight into how simple lifestyle changes, including the consumption of coffee, could impact the risk for atrial fibrillation.

The research has suggested that a moderate intake of coffee of around 3-5 cups per day may reduce mortality risk associated with cardiovascular diseases. Moderate coffee consumption can be defined as 3–5 cups per day, based on the European Food Safety Authority’s review of caffeine safety.

No Symptoms with AFib

Sometimes people with AFib have no symptoms and their condition is only detectable upon physical examination. Others may experience one or more common symptoms such as rapid and irregular heartbeat, dizziness, shortness of breath, weakness, fatigue, and sweating.

Fluttering and palpitations are key symptoms of AFib and are the key difference between AFib and a heart attack, but many heart problems have similar warning signs. If you think you may be having a heart attack, don’t delay. Get emergency help by calling 911 immediately.

The first step to controlling atrial fibrillation is to eliminate coffee. Because of this, coffee and caffeine are frequent topics on AFib discussion forums. But these studies offer interesting information about coffee and its relationship to possibly reducing the risk of atrial fibrillation.