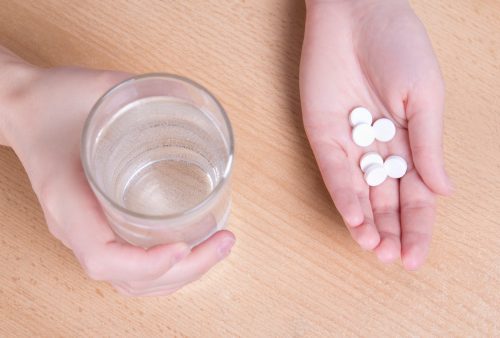 An apple a day may keep the doctor away, but an aspirin a day may keep colon cancer risk at bay. New research suggests a daily dose of aspirin or a nonsteroidal anti-inflammatory drug (NSAID) can reduce a person’s risk of colon cancer.

The study comes from researchers at Newcastle University and the University of Leeds. Their findings suggest a daily baby aspirin (one or two pills) for a minimum of five years may reduce the risk of colon cancer. Additionally, their findings unveiled that taking a daily aspirin counteracted cancer risk in individuals who are overweight.

For the study, men and women took low dose aspirin (75 to 150 mg) for five years. Their data was collected from Danish cancer databases, and researchers examined the health history of more than 10,000 colon-cancer patients. The colon-cancer patients were then compared with 100,000 cancer-free individuals. The findings revealed colon cancer was reduced by 27 percent for those on daily aspirin. Those who took NSAIDs over five years had their colon-cancer risk reduced by 30 to 45 percent.

Co-author of the study Dr. John Baron said, “The protective association is certainly amazing, and it’s a good example of how everyday drugs can have unexpected benefits. But there are also potential risks. I don’t think we should imply or recommend that these medications be taken for cancer prevention without working closely with a physician.”

What the study didn’t reveal was how high-dosage aspirins would impact colon cancer risk or that painkillers don’t necessarily reduce the risk of colon cancer, but rather there is an association between the two. Even with this information lacking Baron stated, “[the findings are] hopeful, because it means that we’re understanding cancer better and better.”

There was no benefit seen in those who took aspirin irregularly. Baron stated in the study that individuals took aspirin steadily – at least every other day – for a minimum of five years before benefits were seen.

The use of high-dose aspirin or NSAIDs regularly may pose side effects like gastrointestinal bleeding and an increased risk of heart attack, according to the FDA.

According to the Centers of Disease Control and Prevention, colon cancer is the leading cause of cancer death in America.

The findings were published in the Annals of Medicine.