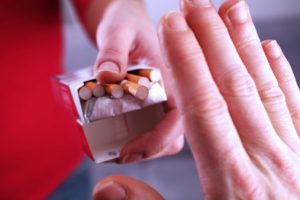 The Action on Smoking and Health reports every six seconds someone dies from a smoking-related illness. On the world stage smoking is a serious issue, but new findings suggest each country has the ability to support smokers to quit.

In the latest review, experts concluded that globally countries can adopt measures to help their populations quit smoking. There were two main findings from the review. First, Cystine, a medication currently available in Europe, has been shown to help smokers quit. And second, training healthcare workers to give advice to their patients to quit should be part of their everyday work.

Worldwide, the death toll of cigarettes is estimated at six million. Current policies to reduce smoking have been to raise taxes, create smoking bans and media campaigns.

“The death and suffering caused worldwide by tobacco far outstrips anything that terrorists have been able to inflict,” said lead author of the report, professor Robert West.

“Many governments have started to introduce measures – such as increasing taxes and restricting smoking in public places – measures which make smokers want to stop. However few countries are actively supporting smokers to stop. Our report shows that every country in the world could be doing something. The more a country does, the more of their citizens’ lives they will protect.”

According to the Centers for Disease Control and Prevention, about 42.1 million adults in the United States smoke cigarettes. And cigarette smoking is the leading cause of preventable disease and death in the U.S., with more than 480,000 deaths each year. That said, the number of smokers over age 18 has decreased from 20.9 percent in 2005 to 17.8 percent in 2013.

The review outlines that many countries fear the cost of supporting smokers to quit, but the new review gives many suggestions to countries which are cost-effective.

The review was published in Addiction.