Home » Bone Health » Could This Micronutrient Hold the Secret to Strong Healthy Bones? 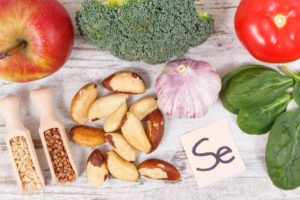 Vitamin D, calcium, and magnesium—that’s the trifecta when it comes to bone health. These three highly recognized nutrients are essential to maintaining strong, healthy bones and limiting the chances of breaks or fractures. They all work together to remake lost bone—bone is constantly being broke down and replaced—to keep bone dense.

But they might not be all you need from a nutritional standpoint to maintain bone health. New research from China is showing that selenium, a micronutrient with antioxidant capabilities, could be a key player for preventing bone loss.

To draw their conclusion about the benefits of selenium for bone health, researchers looked at data from over 6,250 participants aged 40 and over. Participants were ranked into four groups based on selenium consumption and found that selenium intake was associated with osteoporosis risk. Those who ate the most selenium had the lowest risk, while those who ate the least had the highest risk.

It’s an interesting conundrum, however. First, the researchers were unable to say whether or not the association was casual. It also did not indicate cause and effect. Further, too much selenium—even from nutritional sources—may put you at risk of toxicity. More than two or three six oz. servings of Brazil nuts per week, for example, may boost the risk of selenosis: a condition caused by too much selenium that can lead to hair loss, nail loss, irritability, fatigue, and nerve damage. Whether or not food sources of selenium can lead to toxicity, however, is unclear.

So, what are you supposed to do? At this point, it’s too early to say eating a ton of selenium will help—or is even safe. But it does re-enforce the idea that eating a balanced diet can help with bone health. Eating a serving or two of Brazil nuts may help, but so can regularly including fish—yellowfin tuna is another great source—enriched whole grains, and the occasional serving of pork or red meat.

Turn the bone density trifecta into a square with the addition of selenium—it might be a difference-maker when it comes to bone health.