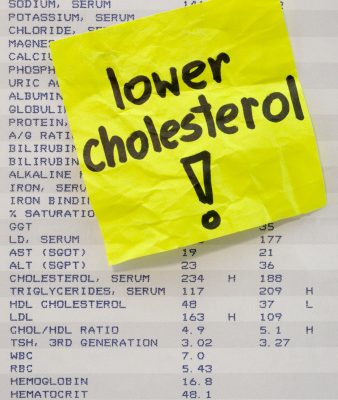 You’ve likely heard that high cholesterol is bad for your heart. But it gets worse.

Researchers at the Duke Cancer Institute say that high cholesterol may also contribute to the spread of breast cancer. The current research was published in Science in the Nov. 29, 2013 edition.

RELATED READING: How To Alter Your Own DNA To Avoid Disease

The Basics Of Cholesterol

Cholesterol is a type of fat in your blood that is used to make cell membranes, hormones and vitamin D in the body. It comes from two sources; 75 percent of cholesterol found in the body is made naturally by your liver and other cells, while the remaining 25 percent comes from the food you eat. There are two major types of cholesterol: low density lipoprotein (LDL) which is commonly referred to as “bad” cholesterol, and high density lipoprotein (HDL), the “good” cholesterol.

LDL can cause plaque to build up in the artery walls, resulting in a narrowing of the arteries which can make it difficult for blood to flow freely through the body. HDL, on the other hand, helps to carry LDL cholesterol away from the artery walls. Keeping cholesterol levels within a healthy range in an effort to maintain good health.


The Link Between Cholesterol And Breast Cancer

To that end, the researchers used mouse models to show that there is direct involvement of 27HC with breast cancer tumor growth. They also revealed the cancer was aggressive, having the ability to spread to other organs of the body. When the mice were given anti-estrogen drugs or when supplementation of 27HC was stopped, the activity of the cholesterol metabolite was inhibited.

The findings using the mouse models were supported by using human breast cancer tissue; researchers confirmed a connection between tumor aggressiveness and the amount of the enzyme that makes 27HC.  The more 27HC, the worse the tumor.

Researchers also found that 27HC can be made in other areas of the body and transported to the cancerous tumor. Increased 27HC may reduce the effectiveness of aromatase inhibitors which are commonly used to treat breast cancer. Another key finding: Cholesterol lowering drugs, such as statins, appear to diminish the effect of 27HC, signalling these drugs as treatment options.

The bottom line is breast cancer tumors are using a new fuel source for tumor growth.  To decrease breast cancer risk, experts say keeping good blood cholesterol should be a priority.  This can be accomplished by diet changes or by taking statin medications.

For women who have already been diagnosed with breast cancer and high blood cholesterol, taking statins may help to prevent resistance to drug therapies including tamoxifen and aromatase inhibitors.

5 things you need to know about your cholesterol