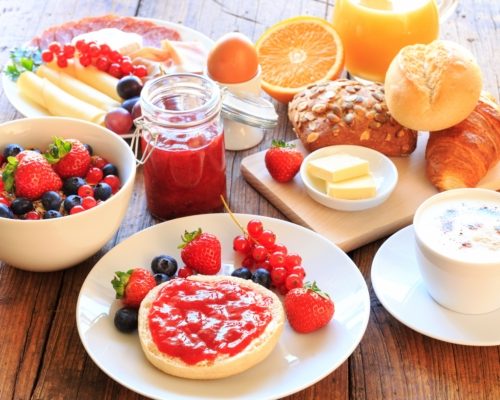 The researchers looked at food frequency questionnaires and tracked the participants’ health outcomes for 16 years. Men who routinely skipped breakfast had a 27 percent higher risk of heart attack or death by heart disease, compared to those ate breakfast. Men who skipped breakfast tended to be younger in age, smokers, employed full time, unmarried, less physically active, and drinking more alcohol. Men who ate food late at night had a 55 percent higher risk of heart disease, compared to those who did not. During the study period, 1,572 men experienced first-time cardiac events.

Study leader Leah E. Cahill explained, “Skipping breakfast may lead to one or more risk factors, including obesity, high blood pressure, high cholesterol, and diabetes, which may in turn lead to a heart attack over time. “

“Don’t skip breakfast. Eating breakfast is associated with a decreased risk of heart attacks. Incorporating many types of healthy foods into your breakfast is an easy way to ensure your meal provides adequate energy and a healthy balance of nutrients, such as protein, carbohydrates, vitamins, and minerals. For example, adding nuts and chopped fruit to a bowl of whole grain cereal or steel-cut oatmeal in the morning is a great way to start the day,” concluded Cahill.

An alternative study found that skipping breakfast may increase the risk of stroke, in particular the risk of cerebral hemorrhage. Skipping breakfast has already been associated with obesity, hypertension, dyslipidemia, and glucose intolerance, which are all known risk factors for cardiovascular disease.

There has been little evidence to support that eating breakfast regularly translates into a reduced risk of heart disease, so no guidelines that recommend including breakfast into your everyday eating have been released.

In the study, researchers sought to uncover a possible link between breakfast consumption and stroke and heart disease risk among a Japanese population.

The researchers wrote, “To the best of our knowledge, this is the first study to investigate the associations of breakfast intake frequency with cardiovascular events that include not only CHD [coronary heart disease] but also stroke and its subtypes in an Asian population.”

The study looked at 82,772 persons with no prior history of heart disease or cancer. Participants were followed for 15 years. They were asked about their breakfast eating habits at the baseline and were classified into one of the four categories: having breakfast zero to two times a week, three to four times, five to six times, or seven times a week.

During the follow-up period, there were 3,772 strokes with 1,051 being cerebral hemorrhage, and 8701 cases of heart disease.

Those who never had breakfast had the highest risk of stroke and heart disease, compared to those who ate breakfast everyday.

Those who ate breakfast were less likely to have high blood pressure.

Other reports noted that cerebral hemorrhage stroke occurs more often in the morning. The researchers speculated, “This effect of breakfast intake on blood pressure in the morning might be one of the mechanisms of the result from the present study.”

Other factors may play a role as well, so additional research is required to further examine the relationship between breakfast and the risk of stroke and heart disease.